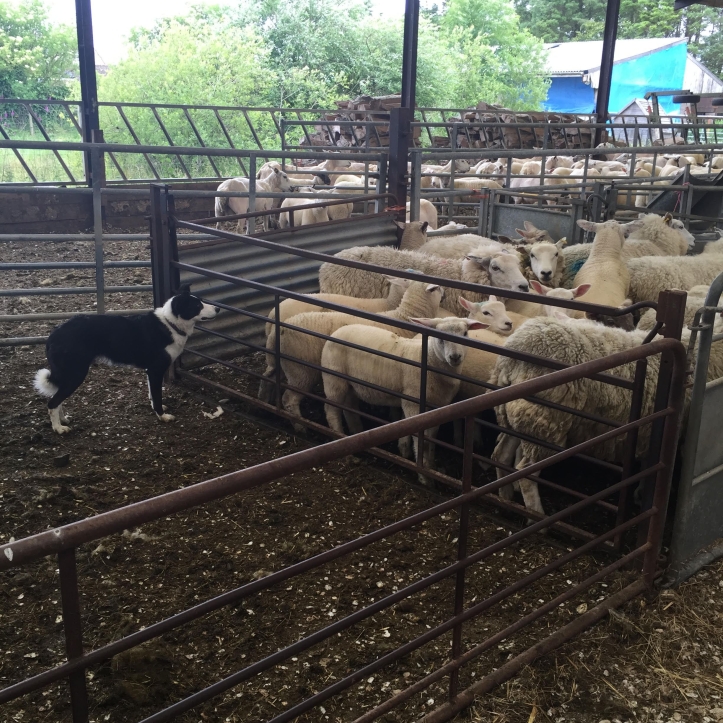 Mist stands ready to move the sheep forward into the next pen. The big wooly ones are the ewes, ready for shearing. The lambs come in with them as well, but just get passed through the chutes to the side. It’s noisy in there with all those mama sheep talking back and forth with their lambs!

The shearing duo that clips the hundreds of sheep at Castle Creavie is made up of Dan, Charlie and Millie’s son, and their family friend, Bill. Both are relatively young. Charlie trained them both and then (and I suspect gratefully) handed that part of the process over to them. It’s hard work. Harder than anything I’ve seen yet on either farm here in Scotland. Shearing sheep requires strong arms, back muscles of steel, a willing attitude, a ton of patience, and pride in your skills.

I mention pride because I can see how it would be easy to give less than your all. People are busy at their own tasks. Much of the time no one is watching what you’re doing. Like moving the sheep, the shearing process is a coordinated effort of several individuals, each doing their part so the whole thing works. And the work could be shoddily done, if that were the acceptable standard. But sheep after sheep, for forty or fifty animals in a row, I saw nothing but a confident determination and professional, careful handling.

Here’s an example: The shearers occasionally nick the skin of an animal. It’s almost unavoidable. I know from my own experience of shearing my rabbits. Sometimes you can’t see, misjudge distance, or the animals suddenly move. I do wonder if it’s like nicking yourself while shaving legs or face. The rabbits don’t seem to mind as much as I do for having caused them a cut. During the sheep shearing, I can’t tell you the number of times I heard “Ahh, sorry love.” just before the inevitable next shout of the word “Spray!” — the call for someone to run in ASAP and spray the cut with an antiseptic.

Heard lots of good-natured cursing though. (“Come ON, ya wee wiggly bugger!) The sheep get nervous and occasionally one goes for a full-on attempt at escape. It’s up to the shearers, through a series of firm holds and specific body positions, to keep the sheep immobilized. If they can’t, the shearers have to stop, turn off and put down their clippers, and use both hands to wrangle a sheep back into place. And that takes time. For shearers, time is money. They are paid per sheep sheared. The smoother and more quickly a shearing session goes, the more they make per hour. So any interruption is not just about a stilted flow of work. It also affects their bottom line.

And patience – a LOT of patience- is needed. Unruly sheep, wet wool, or slow work from the rest of the team can be frustrating. The shearers are there to move, move, move those sheep. I was delighted to see Bill, over and over again, take a deep breath at any disruption and gentle himself as well as the sheep with which he was struggling. In a low voice, he’d talk with her,  (“It’s alright lass. Alright. That’s good, lass”), check his hold, slow or stop for a moment until she was calmer, then resume. Dan was more likely to erupt with hilarious expletives. Between the two shearers, I was always smiling to myself or outright laughing.

The two of them arrived in the evening usually, after finishing their day jobs and driving to Castle Creavie. Dan has his own farm near the city of Carlisle. Bill lives nearby, in a small village called Palnackie.  He keeps a small herd of his own and works two jobs helping out at other farms. Both men arrive with equipment trailered to the back of their vehicle: the apparatus for holding/lowering sheep to the shearers and the shearing equipment itself. Each shearer uses an individual wooden platform or rubber surface to stand on, soft woolen slippers, a bag with their clippers, blades, towels,oil and various other tools of the trade, and a tall, steel framework from which the clippers and cords are hung. Later I realized the steel structure kept everything off the ground, preventing any tangles or tripping. Pretty clever set up. In fact, the entire set up for moving and shearing the sheep was pretty clever. Bill told me that Charlie and Millie’s farm is one of the best places they shear. It’s organized, efficient, and Charlie is constantly thinking of ways to improve how the farm and its individual endeavors run.

Everything starts when the sheep get moved in from the holding pen to the barn. While that’s happening, the shearers set up and test their equipment. The dogs and Charlie move the sheep in small groups into pens which eventually funnel them into a line. One by one, the sheep move forward until it’s their turn. A panel slides down to the sheep’s right or left, a pair of arms scoops the sheep out sideways, rolls it down onto the ground and then starts taking off the wool. When the entire coat is removed, the sheep is released. It gets up, shakes itself off, then runs back over to the pen where it can join the group of finished ewes and waiting lambs. As it runs away, often with a little jump (!!!), the “roustabout” runs in and picks up the fleece to get it out of the way. He/she walks over to a nearby sheet of plywood that’s lying on the ground, unfurls the fleece, checks it for poop and any badly mangled bits, then rolls the fleece up and stows it into one of the big wool bags hanging from a steel framework. The bag fills quickly. The roustabouts also have to hop up onto the framework and get in the wool bag, compressing the fleeces. You want to get as many in there as possible. Meanwhile, the roustabout is listening for any yells of “Spray!” because they are responsible for zipping over, picking up the bottle of antiseptic, and administering the medicine when a sheep gets nicked. The timing works best if there is one roustabout per shearer. But there are many times when Millie is the only roustabout on the team. I was the lone roustabout for about an hour and a half one time. Boy, was that stressful! I don’t think I’ve ever moved that much in my entire life!!!

On the other side of the shearers, Charlie is working the sheep and getting them to move up the line without pause. I thought it was an easy job until I lent a hand. Ever try to get a 150 pound sheep to go forward when it doesn’t want to? Believe me, it’s not easy. And sometimes when they move, they go backwards instead! They don’t listen to reason either. Or begging. You have to clap, sing, shout, grab them by their rumps and shove and do just about everything short of lighting a fire to get them to move. The most important thing is to make sure there’s one there when the shearer goes for the grab. Keep those sheep moving, moving, moving.

So yes, there’s a lot of running around. And lifting, bending, wrestling, cursing and most definitely sweating. But I still had a GREAT time. Let me show you what some of it looked like! Here’s the sequence from a typical ewe’s run through:

For fear of extensive downloading times, I’ll continue in a second post.