South to the Vale of York 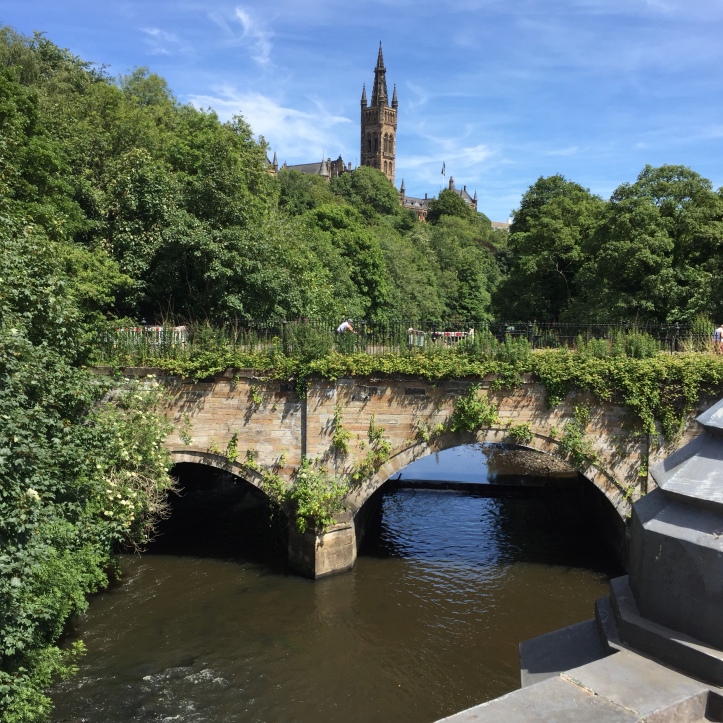 A wonderful element of traveling with a group is the security felt therein. You know you have folks with whom you can chat, commiserate, and share the moments as they occur. You also know that if anything happens, there are others there to help. Just reach out your hand. Or shout “Hey!” They’ve got your back while adventuring in unfamiliar territory.

I had one more day and a half with that kind of support. Heather and I spent some time knocking around Glasgow before she had to meet her next tour group. And I’d have to pick up rental car and drive south for my next scheduled chunk of time – a housesit outside of York.

We wandered, we ate food, we knitted at a pub, we went to the profoundly beautiful exhibit of Charles Rennie MacKintosh (and gang) at the Kelvingrove Museum. The donut picture appears because Heather and her family now seem to be on a hunt for outrageous donuts everywhere they travel. She tells me this phenomenon started with our visit to Whoooo’s Donuts in Santa Fe back in October. Who knew you could bag donut shops like 14ers (or Munroes, as they refer to their highest mountains here)?

Heather went with me the next morning to pick up the rental car. Then I had to drive her to the airport to meet her next group. Trial by fire! Thank goodness she was in the car and could direct me. But after I dropped her off, it was just me and the GPS she’d left for me to use.

I’d never used a GPS before. In fact, the only time I’d ever seen such a thing was on the documentaries Ewan MacGregor and Charlie Boorman made about their long distance travels on motorcycles. So, lo and behold, you plug this thing into your dashboard, give it your destination, and the thing tells you what to do and how to do it every step of the way. Miraculous!

Why have I never used one before???

Well, I quickly figured out how to program the thing and set out for points south. My agenda: get out of the Glasgow airport, find the freeway, get on it going in the correct direction, drive an hour or so south and stop to visit at Killilaw House near Melrose.

The first three items on the agenda took me quite a while to accomplish, even with the GPS talking to me. I discovered that signs for which exit to take at the roundabout are RIGHT AT THE POINT OF EXIT SO TURN NOW. And I managed to get on the freeway, off again, turn around, then get off again so I could turn around again. What did I learn? Trust the GPS. Even if you are disoriented, it isn’t. But hooray, I finally left Glasgow behind. (No disrespect meant toward Glasgow. I like this city very much.) south then, into an area of Scotland referred to as The Borders.

Here’s a song by the band Breabach about The Borders. I had this much in my mind while driving south and then back north again just a few days later.

The GPS led me right to the front door of this lovely manor in the woods, just near the town of Melrose. Rowan Tree Travel often spends time in this area. We try hard to scope out anyplace we might stay before bringing our travelers there. Also helps to be able to describe the facilities and feel when folks have questions. Things like “No, there is no bathroom IN your room like at a hotel. The bathrooms are down the hall, like at a house. A very, very grand house.” A few pics for you, just because it was so beautiful. I left there with the GPS set and ready to head south: estimating a three hour highway drive across the border, into England, and down to my housesit near York. I didn’t know about programming the GPS to look at various routes. I just told it where I wanted to go and hit “Start Route”. What I learned is that sometimes it’s good to scout your destination along with possible routes… the GPS took me across the border, through beautiful Northumberland National Park and right down into Newcastle at 5:15 pm. Think Denver at rush hour. Anyone driving on I-25 north knows to get through Denver either well before or well after the crush times. I didn’t think of possible traffic at all. I was concerned with staying to the right and getting on and off the roundabouts in the correct spot. So when I hit Newcastle traffic, I was stunned. Bumper to bumper, moving a few feet at a time, for an hour and a half. No joke. Finally, finally managed to get past that mess and continued south, arriving at my destination around 8:30 pm. Whew! One hell of a drive. Congested freeways to tiny, single track roads where you have to pullover to let the other car get past you on the narrow street. It was an immersion in UK driving alright.

The homeowners, Sue and Duncan, were warm and welcoming. They’d made dinner and held it until I arrived. They’d be off in the morning for a ten day holiday in Spain. We chatted and drank wine. But I was clearly exhausted. I was shown around, made notes about what I need to do and where things were, then I was off to bed.

When I rose the next morning, Sue and Duncan were already gone. I vowed to do absolutely nothing that day except perhaps laundry. And catching up on the blog. In fact, I wrote the majority of my posts about the Hebrides while at my housesit in Myton-on-Swale. I also enjoyed finally spending some time alone. For someone who essentially lives by herself, I had just spent two weeks with people, people, people 24/7. My brain was a bit fried. So quiet, alone time, space to recover and write was EXACTLY what I needed.

Let me give you just a few pics of where I landed. Then in the next post, I’ll share sone of what I learned while in Yorkshire and what I saw. Turns out that Myton-on-Swale is a tiny town located in the vast Vale of York, a broad plain of fertile flatlands in the north of England. It’s been an agricultural “bread basket” for England for hundreds of years. But more about the town, its history, etc in the next post!