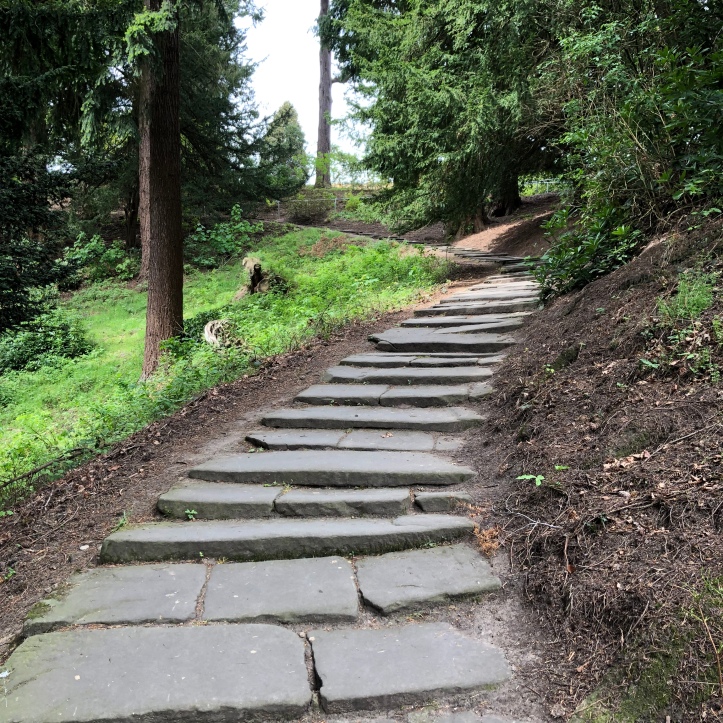 Something happened. And I want to tell you about it.

I spent most of yesterday working on my computer. It rained and rained. I was involved in the tedious task of updating the Rowan Tree Travel website, which goes something like this: scroll through thousands of tiny photos on my phone to find the just-right picture, open in Photoshop, reformat, save, load to website media file, check email while waiting (respond to three), replace-move-arrange-save new photo, agonize over associated wording, rejoice at section completed. Lather, rinse, repeat.

Finally, by 4:00, I noticed it had stopped raining. A half hour later, the sun had broken through the clouds and was sending bright shafts of goodness down onto the glistening, green everything. So I saved my work, found my shoes, threw wallet, raincoat, knitting project (’cause you never know when you might want to knit) and phone into my backpack. I was out the door in five minutes.

I took off walking. No particular destination. Just moving my body, being outside buildings instead of inside them. My calves and ankles protested. They’ve been giving me trouble for months, especially my left ankle. I ignored them. I kept walking.

I walked through streets with parks and limestone-built row houses, over bridges, around roundabouts. I happened upon the ruins of the Roman amphitheater for which Cirencester is well known. (In the early days of Roman presence in Britain, Cirencester was its capitol and largest city. I’m going to the museum later today to find out more. If it ever stops raining. Yes, it’s raining again.)

I walked for over an hour, circling through town and eventually winding my way back down towards its center. I stopped at Waitrose. It’s an upscale market here. A Brit version of Whole Foods. It seemed like a good place to stop for a bit. Not in need of groceries, I threaded my way past the aisles and over to the cafe. (Brit pronunciation interjection: here one says CA-fey, with all the emphasis on the first syllable instead of the second. One also says GARE-age when hoping to fix a flat tire. But I digress…)

I ordered a toastie (grilled sandwich) and grabbed a soda from the case. I didn’t even bother asking for a glass with ice. Just yesterday when I did that, I received a four-inch-tall tumbler with three cubes in it. “People! No!”, I wanted to scream. But I didn’t. I just smiled weakly and took my drink and “glass of ice” to the table. But again, I digress…

I sat in the CA-fey and read. I’d recently downloaded Annie Lamott’s Bird by Bird: Some Instructions on Writing and Life. Every now and again, I pick up a book about writing. I don’t know what I hope to gain from them. Some magic formula? Some trick that makes it all easy? Something that will motivate me to DO something in particular with writing? None of them have provided any of that stuff. Mostly they say the same thing: the best way to write is to write. Butt in chair. Write. And then they surround that advice with lovely, humorous anecdotes about the many ways humans can avoid doing the one thing they want to be doing. Even Steven King’s tome on the subject, On Writing, said basically the same thing. Though he also included a lot of autobiographical anecdotes and had to make the book 800 pages long.

So I’m reading Annie Lamott’s book and chuckling intermittently. She’s funny. When I come across this snippet of poetry she shares with her readers:

Long after the conference was over, I found a poem by Bill Holm, which I wanted to send to the young man. But I no longer had his address. It is called “August in Waterton, Alberta”:

Above me, wind does its best

to blow leaves off

the aspen tree a month too soon.

No use wind. All you succeed

in doing is making music, the noise

Everything stopped for me in that moment. I looked up from my phone. But I didn’t see the people around me at tables, or the shopping carts or the cars parked just beyond the glass walls. I was at home, standing at my open front door in the morning, hearing the wind move through the aspens there, creating hundreds of shimmering light prisms with the leaves and a making a sound like peacefulness, like simple joy. I thought of lying on a wooden bench at summer camp, back stretched along its length, looking up at the tops of ponderosa pines swaying in the circle of my view. The sound then, that sound – of the wind through their towering forms. And the smell of pine needles. And the feeling of happiness.

I thought of the sound. Wind through leaves. That the wind was ever trying, trying, trying. Sometimes successful, sometimes not. But the effort – the effort – created the most beautiful sound in the world. And the failure was neither here nor there. Of no importance, really. Because the sound – that sound – was a symphony.

I read the lines of the poem again and again.

All the effort, all the failures of my life, came rushing in.

What if they weren’t even the point? What if they mattered not one teensy bit? What if it was always about the fabric of my life itself and the beauty of its construction that was the real outcome of all that effort? All that failure?

What if? What if?

Shell-shocked, I looked around me at all the other people, the busy market, the rain, the cups of coffee and silverware and crumpled napkins on the table around me. I placed all my things back in my backpack and shouldered it, ready to be on my way, holding this new thought.

At the exit, I saw it had started raining. Within seconds it was absolutely pouring. I scrabbled around in my backpack and pulled out my raincoat.

I didn’t even care. What was a little rain? Heck, what was a LOT of rain? My head was humming. Not with specific thoughts. But instead with a sense that I’d just discovered something very, very important. Then I shouldered my backpack once again and headed off down the street, jumping from puddle to puddle and laughing to myself over having to walk in such a ridiculous downpour.

That night, back in the house, I cried for the first time in ages. I cried long and hard. I cried for all the failures, for all the effort of my adult years. I cried for the frustration of boredom, the tearing of my heart at every big transition, the wary first steps in new locations, the deep, rabid rift in my chest I revisit every time I have to think of two husbands that chose to unchoose me. I cried for every hopeful undertaking of the last three decades that ended in not quite what I would have hoped for. Or in a crash and burn scenario. I cried and cried. Failure, failure, failure.

But I cried too, for the recognition that all that failure, all that effort, was just the wind through the trees. That what it had made was me – was my life. It made compassion and understanding. It made laughter and discovery and great care. It made fierceness and courage and the interior ghost of a presence that is me. It all made music: my life!

And the failure… well, it didn’t matter at all. It was the symphony that was the point all along. The sound.

Write, don’t write. Get the website done. Feed the cats. Pack up again and get ready for the next tour. Make lists. Get things done. Despair over ever getting all of them done. Decide it’s impossible anyway. Turn to something I’d rather be doing. These things are the effort of the wind – and might result in failure, might result in success. No matter. Does not matter. They make a sound. I make a sound. My life makes the sound of the wind moving through the trees.