Iceland: The name of the country is the shortest word you’ll see.

Good morning, everyone. See that salmon on my plate? It is possibly the best salmon I’ve tasted in my entire life. Leave it to an island in the middle (almost literally) of the north Atlantic to offer up such amazing flavor and freshness. It rivals Scottish salmon. And that’s saying something!

It’s a busy, bustling breakfast time at the Fosshotel Reykjavik. I see faces from many cultures. It’s interesting to me how predictive the features are. Nordic looking folks actually are speaking in Scandinavian-sounding tongues. Japanese and Thai issue forth from predictable sources. I’m so used to not presuming a face will match the language used in the States as our residents come from so many places. But here in the hotel, the faces match the language pretty consistently.

It’s been a whirlwind couple of days. I left Santa Fe on Monday, mid day. Our plane was delayed by the need to be de-iced. That put us in Denver 25 minutes behind schedule. Most everyone on the flight had short connection times. Panic set in for many of the passengers. Even I was wondering “Can I make it from the arrival gate, through to the train, over to the international terminal and to my gate in 30 minutes?” As we know, the answer was yes since I’m writing to you from Reykjavik. But it was a hard hustle. I was the absolutely last passenger to board the plane. And what a plane it was! Oh lovely Icelandair, how I love thee! United will get you to Europe, sure. As will Delta and others. But there’s just something lovely about Icelandair. The seats are comfy, the food is good, the stewardesses are nice and it feels so very low stress on those planes. My flight was direct from Denver to Reykjavik. What a pleasure. Before I had the chance to become bored, we were there.

Here’s the beauty of having been somewhere before: you have a clue of where to go and what to do. I love that. I walked right outside and over to the Flybus. The airport here is actually about 45 minutes outside of Reykjavik. You end up taking a bus into town, then transferring to a smaller shuttle that drops you in front of your hotel. A little roundabout, but nothing too taxing for the sleep deprived.

The Fosshotel Reykjavik is lovely. Simple, perfectly utilitarian, with just a touch of elegance. In fact, the preceding words describe much of Iceland, in my opinion. The architecture. The manner of the residents. The general aesthetic. At least that’s what I’ve gleaned so far. The landscape is covered in a monolithic layer of white. After months of a mild fall/winter warmth – becoming worrisome in its length- winter fell here. Fell hard. Everything is snowpacked and icy. Even our guides have said this cold and ice is unusually harsh for them. But as in Scotland, so it goes in Iceland. “There is no bad weather, only inappropriate clothing.” A lesson of which I’d soon be reminded.

My hotel room was ready, so I was able to get to my room, drop my stuff and go downstairs for breakfast. It’s a very international range of offerings here, from noodles and seaweed (east Asia), to fruit and skyr (local), to pancakes and eggs (good ol’ American), baked beans (British), and an exquisite variety of breads. I’ve been enjoying toast every morning. For a country that doesn’t grow wheat, these Icelanders (Icelandians? Icelandics? Icelandniks?) know how to bake a good loaf of bread. After breakfast, I returned to my room and tried to get organized for the next few days. Then I zoned out for an hour, supine on the bed. At noon I had to be down the road at a bus pickup for tour number one 1. No sleep all night. Who’s idea was a tour on the day of arrival? Oh, mine. Right.

Luckily, it would only be a half day tour. Very relaxed. Very beautiful. I only fell asleep once or twice. Our small van took about 15 passengers north, out of Reykjavik, and on a shortened version of the Golden Circle – a tour that usually takes all day. Because I was only semi-cognizant of place names and such, I’ll just show you a few pictures. First we visited Thingvellir National Park. (Just wait. The names get longer and stranger with each day that passes). It’s a broad, sweeping plain which was the site of historic yearly gatherings of all the Viking chiefs plus is geologically significant as a place where the North American and Euro-Asian tectonic plates come up against each other. It was really VERY cool. I kept thinking how my friend Maria’s husband, a geologist, would enjoy seeing it. But even someone so geologically ignorant as me could be awed by the recognition of such a place.

Next we traveled farther north to the very beautiful Gullfoss waterfall. Even frozen, it was spectacular. 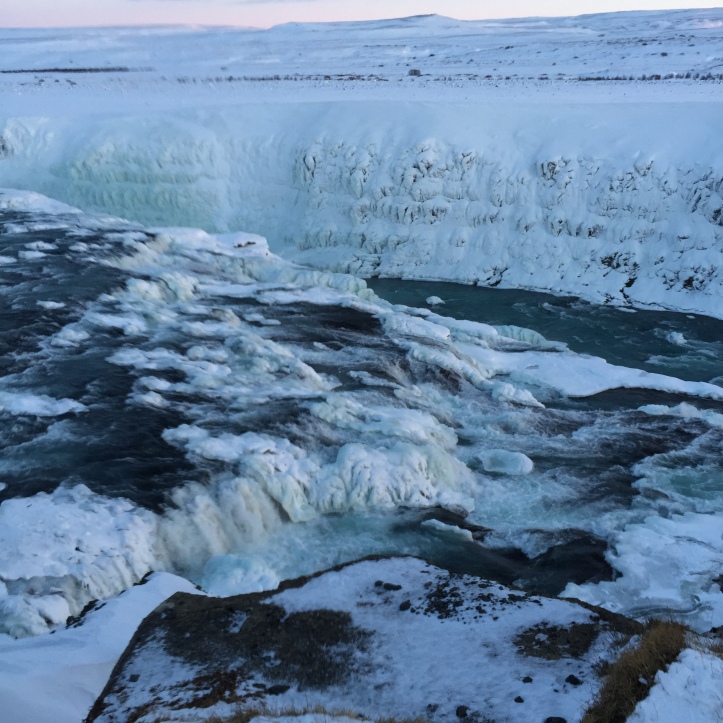 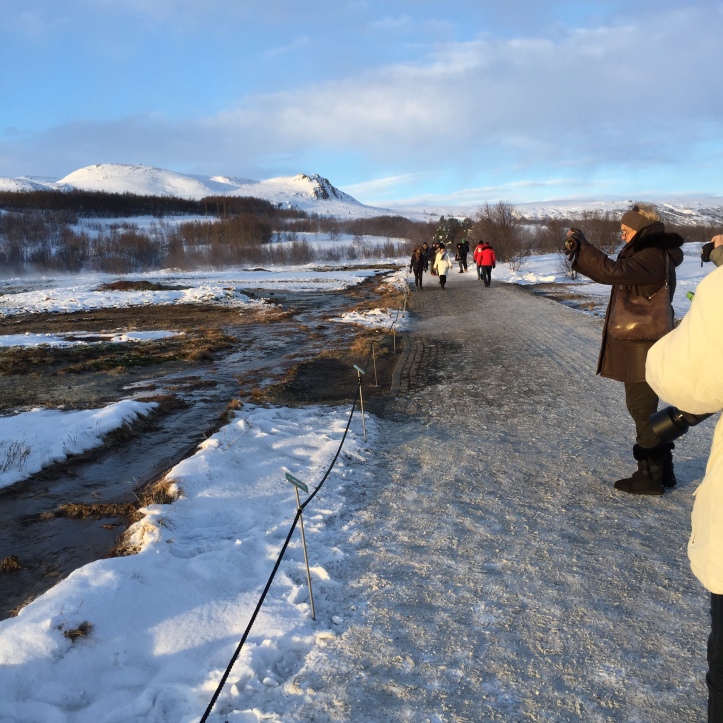 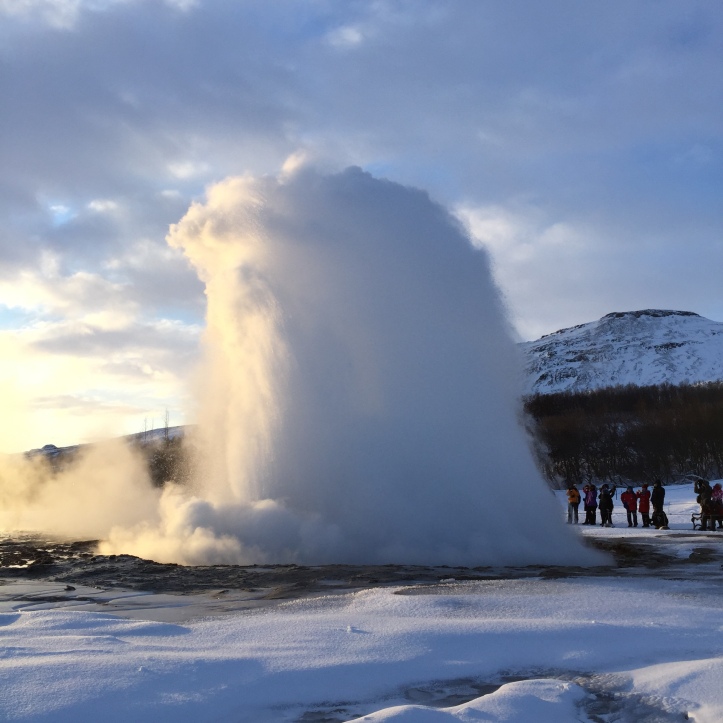 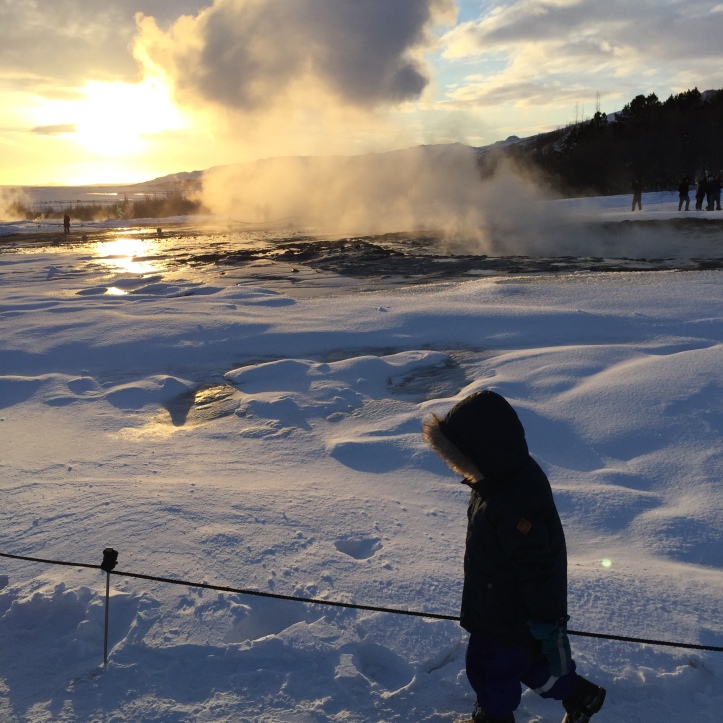 I had on jeans and a fleece and wool socks and my big down coat. Still, I was cold for much of the afternoon. Had a head band and mittens, and a scarf. But at -4 C, it just wasn’t enough. I had not expected the weather to be so cold. People are always saying that Iceland really isn’t that cold in the winter – just dark. And wet. I suppose arriving here this week was a bit like visiting Seattle during a freak cold front, with miles of snow having just fallen and temperatures never lifting above freezing. Much of the afternoon, I looked like this:

Good news, though! We made it back to the hotel by about 7pm. I ran a blissfully hot bath for myself. I crawled into my comfy, Icelandic bed at the early hour of 8pm. But before doing so, I made sure to locate my long underwear, handspun/handknit wool sweater and thick, handknit wool socks to wear the next day.

Next up: learning about Iceland, a very merry geologist, more snow than I’ve ever seen in my life, and an exceptional local beer.