Monday morning I was up, dressed and ready to head out for more visits by 9am. I had a driver picking me up. As I came down into the lobby of the hotel, I saw a woman with a notebook, wearing a gorgeous Icelandic sweater, and caught her eye. “I’m Suzie!” She smiled and introduced herself and we headed out to the car. I should have written down her name. It was Icelandic and started with St, but my brain let it go within seconds of receiving it. I just looked up Nordic names starting with St. There was a long list. I’m going to pick Steinrun and hope like hell that if she ever sees this blog, she’ll forgive me. (Hey! You never know. That might actually be the right name. I think it is. Sigh.) Steinrun explained, “They called me to drive not because of such good English but because I am also a knitter!” I laughed and said “Perfect!”

I didn’t realize how far north we’d be going on this visit. It took us over an hour to dive north, up the west coast, almost to the areas I’d visited on my first day’s Golden Circle tour. Again, the surrounding landscape looked like this:

But it was worth the drive. Just outside the town of Bogarnes, we turned off the main road. Again into the wild expanse of white nothingness!!! We were headed to the studio of Gudrun Bjarnadottir, the home of Hespa Yarns. 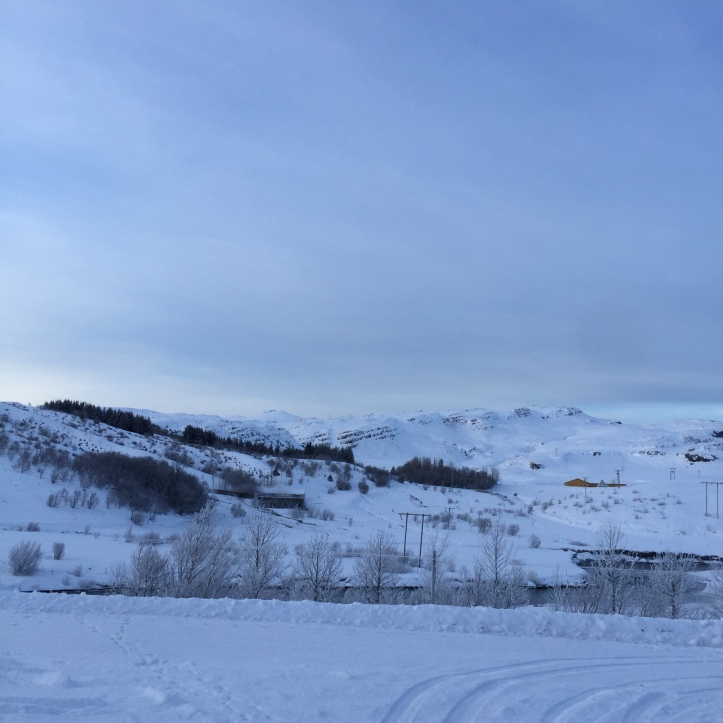 That’s her home, the yellow, and her studio right next door. We grabbed coffee from the house and then went over. Oh, there was also a fantastic dog. Forgot to get a picture of him… The door opened and here’s what I saw: 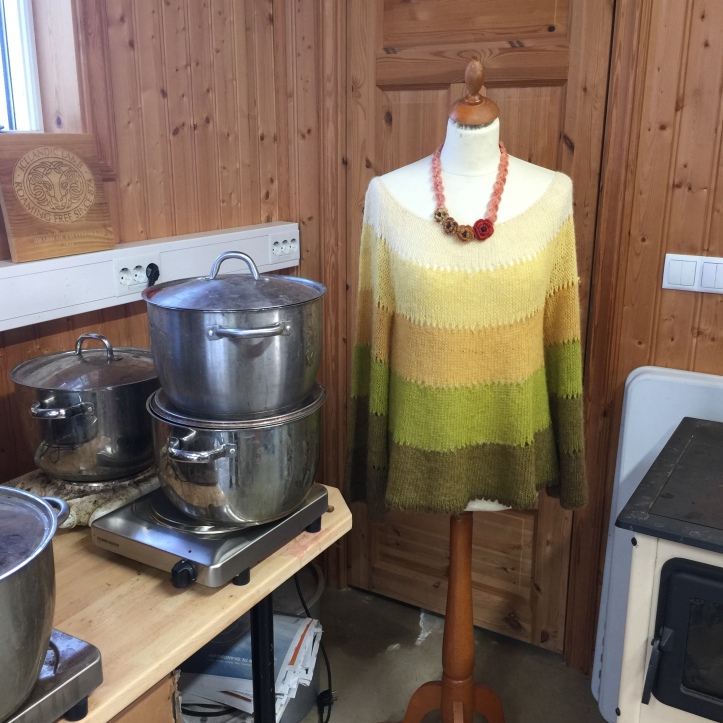 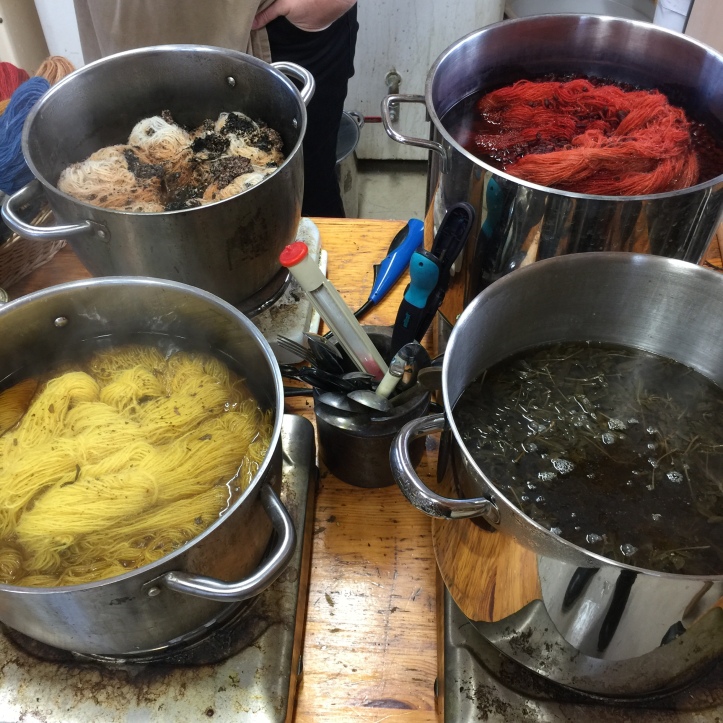 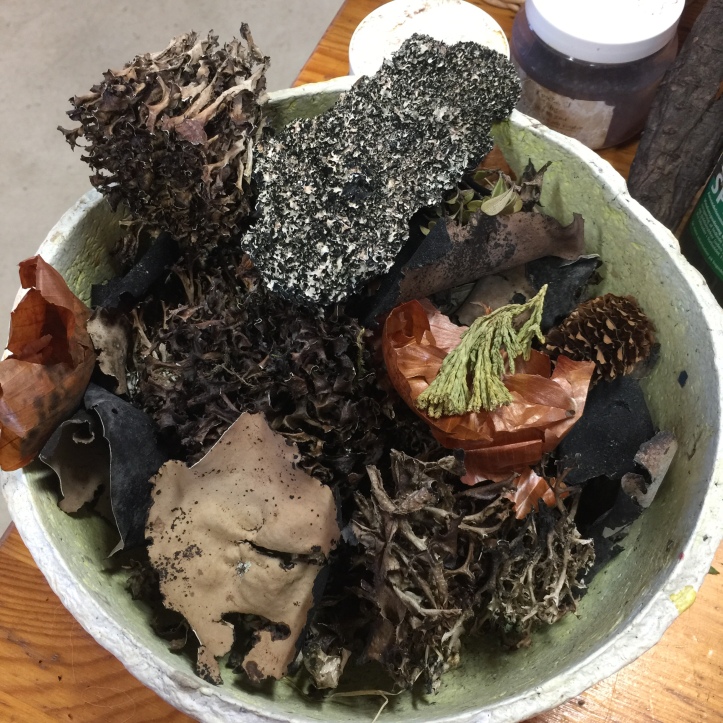 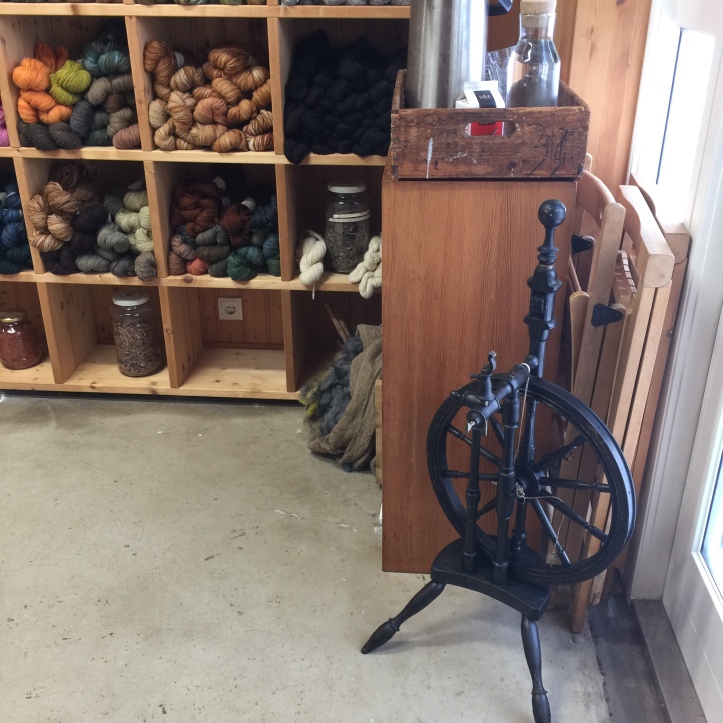 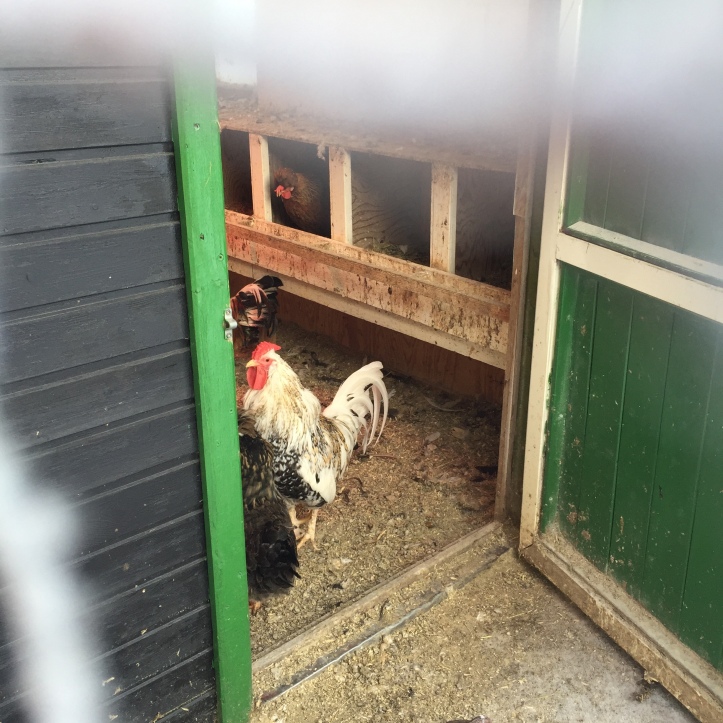 Wow. I feel like I drove through the frozen tundra to get to color heaven! Dyeing with natural materials is not new to me. I’ve taken workshops, watched my sister’s dye processes, have seen many demonstrations, and there are several people in my home state of New Mexico working with natural dyes on a regular basis. However, the plant materials used from place to place are different. I’m always interested to learn what folks have been using in their home location. Every locale has been creating color for textiles since long before industrial processes and dyes.

Gudrun’s journey with plant dyes in Iceland started during her time in school. Her master’s degree was research on plants indigenous to Iceland and how they were used. She further specialized her research toward native plants’ historic use in creating color. All that came from a scientific interest rather than from a craft or artistic need. In fact, she delighted in telling how she now uses dye demonstrations to get her students interested in chemistry – real life uses, dramatic color changes, the interaction between acid and alkaline, oxidization, etc etc. But I’m not fooled. She may be a university professor still, teaching at the nearby agricultural college, but her heart is deep in this craft. Her home is full of fiber, spinning wheels, knitting projects. She mentions “accidental knitting projects” that get made up in between other work. She’s an artisan of the highest order. And not just for her knitting. She’s been experimenting with these natural dyes for many years. She’s got the process, the chemical relationships and the timing down. No small feat that. Natural dyestuffs are notoriously unpredictable. They are also not known for particularly intense color. Gudrun is an absolute master. Her colorwork is among the best I’ve ever seen. Intense and vivid, it captures your eye with its beauty.

We had a long talk about the native plants that create color: lichens/moss, leaves and roots and twigs of various plants. Historically, Icelandic plants could create yellows and greens and browns. Red was possible but required a great deal of plant material, so wasn’t common. It was the color of the upper class and wealthy – expensive and scarce. Then trade brought indigo (blue) and madder (red) to the island. With blue, red and yellow, every color is possible and from that point forward, textiles in Iceland reflect the use of all of them. The reds and blues remained expensive and scarce, though — still the color of the wealthy. She showed me a sample of a plant-dyed black skein of yarn. Black was quite popular also and Icelandic women of all classes wore it widely.

I laughed longest when Gudrun spoke of her early days experimenting with dyes. At one point, she needed a great deal of urine in order to set the dye for one of her plants. Icelandic moss (actually a lichen) generally produces yellow. However, if soaked in cow urine that is changed daily, it will produce red. It was the only red available from Icelandic plants, even if it retained quite a pungent odor, so was used occasionally. So to recreate this historic dye process, she put out the request and had local kids gathering urine for her. Apparently, they worked in pairs and had a trick! One would tickle the cow just so. The other would be below, catching the urine in a container. In fact, she received an immense amount of urine this way! One can see why the locals preferred to dye with madder once it began to arrive on their shores. Gudrun also arrives home occasionally to a pile of plant cuttings or a bag of rootstuffs left at her door. The surrounding community knows that she dyes from plant materials. They are happy to drop off anything she might find useful.

All this time I was talking with Gudrun, Steinrun was out in the car knitting. I discovered so when I went back to the car to get my wallet. “No! I am happy to knit and to talk with my mother on the phone!” She was working on this:

I could have happily stayed in Gudrun’s studio all day. But alas! I had another appointment. Had to make my purchases, say my goodbyes and leave color heaven. Sigh. See that sweater in the earlier pic with bands of color! I bought enough skeins of yarn to make that. I had fun picking out – with Gudrun’s expert help – the different colors I would use. Six skeins of yarn in a variety of gold and orange and rust shades. Some solid, some variegated. CanNOT wait to start on it.

I didn’t mention it before, but Gudrun works her dye magic on the traditional Lopi yarn made by Istex — mostly in the Letttilopi, a lighter weight yarn. As I left, I knew I was headed right to her source. I’d be visiting the mill that gathers, processes and makes available the iconic yarn known around the world: Lopi.

So off we went, back down south to the town of Alafoss, quite near Reykjavik. We were a bit behind, so I chose not to visit the famous wool store in Alafoss. I was also frightened by the thought of more beautiful yarn and what I might buy!!

Instead, we went on to Istex itself, where I had an appointment to tour the facility. I met one of the managers, Siggi. To my surprise, Siggi was a man. I don’t know why I thought that was a woman’s name. I know better now. Siggi greeted me warmly and immediately apologized that he was not their usual host/guide. Sunna, whom I’d originally contacted, was on maternity leave. Now, hold on to your hats because in Iceland, maternity leave is about 7 months!!! Wow! Paid maternity leave for almost a year?!?!? I’m surprised the population in Iceland is so low.

Siggi turned out to be a genial, informative host. First we sat in the employee dining room and chatted. I learned a bit about the history of the mill – that it went through something of a failure in the 90s and was going to close. Realizing it’s importance to their livelihood, the sheep farmers got together and formed a new entiry, basically a coop, so the mill would be owned by them. They found some private investors to help. They asked experienced mill staff to continue on with them and separated themselves from any retail aspects of the previous business. (At one time, the wool shop in Alafoss was their outlet store and the two were connected, but that is no longer the case.) Bit by bit, the new coop rebuilt the stability of the mill. The “save” is a very big deal. Without Istex, there’s no way for individual farmers to transform their wool into something usable, easy to export, and with the value of a name and reputation like Lopi. It may be large mill. It might even look “corporate” and “industrial” in relation to the homey wonderfulness of Uppspunni. But its role in the supply chain from sheep farmer to knitter/weaver/dyer is crucial. For Iceland and for the markets beyond.

I have to tell you, wandering through the mill felt like a scene straight out of Charlie and the Chocolate factory. There are all kinds of big machines doing crazy things, making strange noises, creating amazing stuff. No Oompa Loompas around though. Everyone working there just looked like a regular person.

How is it that spellcheck has the word Oompa already on offer? Do a lot of people write about Willy Wonka’s chocolate factory? Or does the word oompa mean something in another language? And if so, why would spellcheck offer it up to someone writing in English? These questions boggle the mind.

A quick look around the mill! 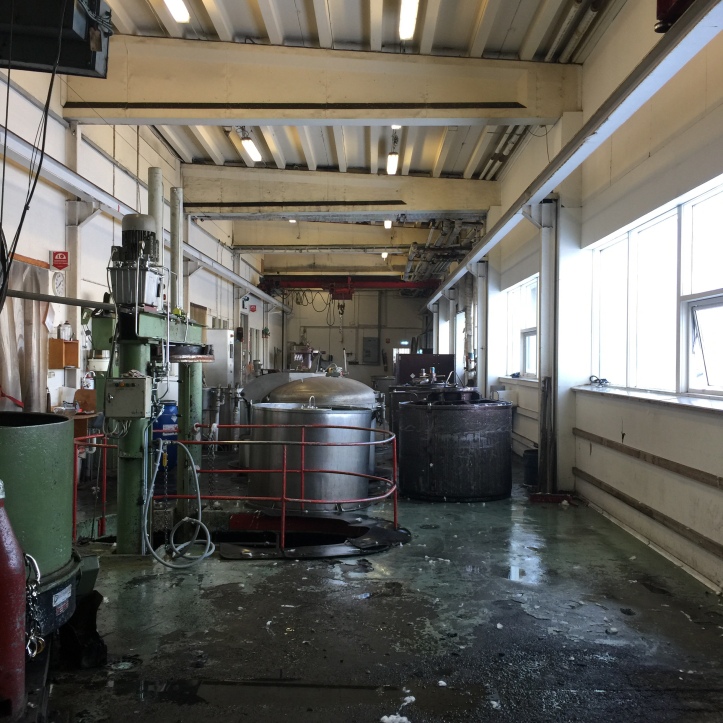 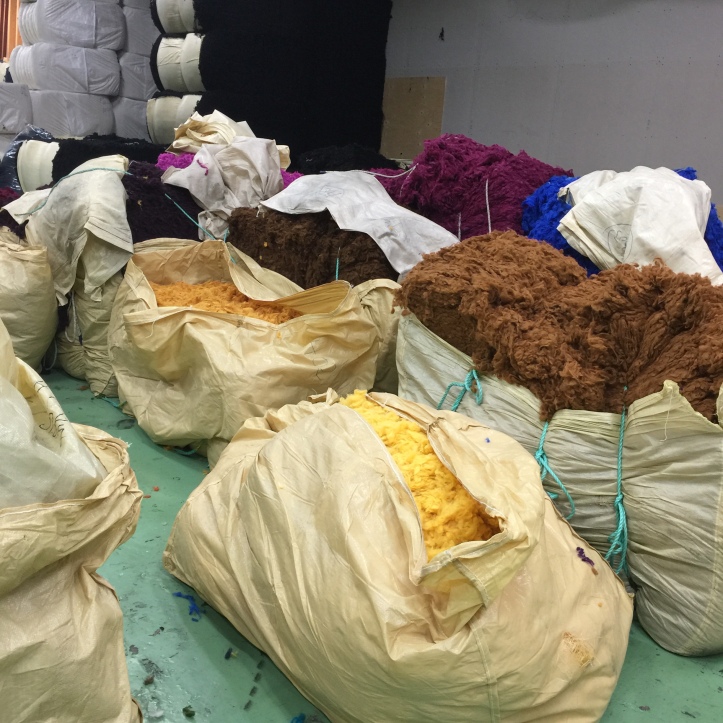 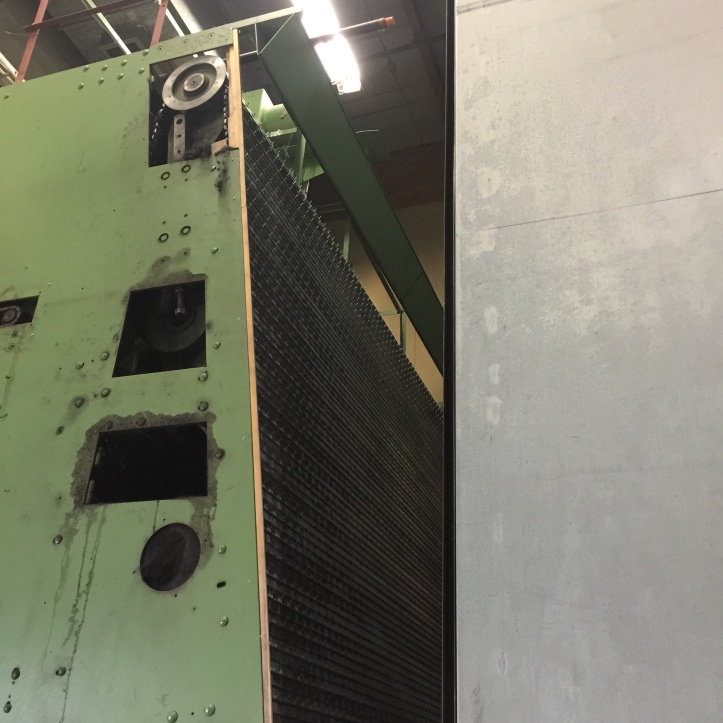 And there you have it. Icelandic Lopi yarn, gathered from farms across the country, milled into yarn by a farmer-owned facility, ready to head out. Very impressive. And the whole thing just made me happy.

Had to get back to the hotel for a scheduled tour that evening, so Steinrun and I drove back to the Fosshotel Reykjavik. I gathered my goodies once again and was dropped right at my hotel. A lovely day, some lovely visits, a lovely knitting driver, and lots lots of lovely wool!

Next up: a final post on Iceland and away to home.