Here’s the group (minus me). See how sunny it is? Miraculous. Splendiferous. Even… warm!

It’s been two days of glorious walking since I last posted. Plus one of deskwork. But hey, I did the deskwork from here, so it wasn’t too terrible:

And out the window I looked across at this:

Where has this job been all my life?!?!

Back to it though… Our first morning in Chipping Campden, everyone was up and decked out in hiking gear and ready, ready, ready to go. We walked through nearby fields and through forests, winding our way over to Hidcote Manor Garden. I had never heard of the place. But I HAVE heard of lavendula augustifolia, aka Hidcote lavender. The owner of the manor, Laurence Johnston, was an American anglophile so much in love with the English that he went off and fought for them in the Boer War. Afterwords, he purchase this estate in the Cotswolds. He was a great admirer of the Arts and Crafts era artisans surrounding him in the Cotswolds, so began constructing a fantastic garden at the manor, based on the design principles of that movement. Outdoor “rooms” of themes in color and materials extend, one after another, in many directions. The most formal are adjacent to the house. Then, as you work your way outward, each becomes less and less so until finally you transition into naturalized landscape and organic paths and planting arrangements. Finally, at the edges of the property, great views across the Cotswold are framed by flowering trees. It’s, to be understated, really something special. 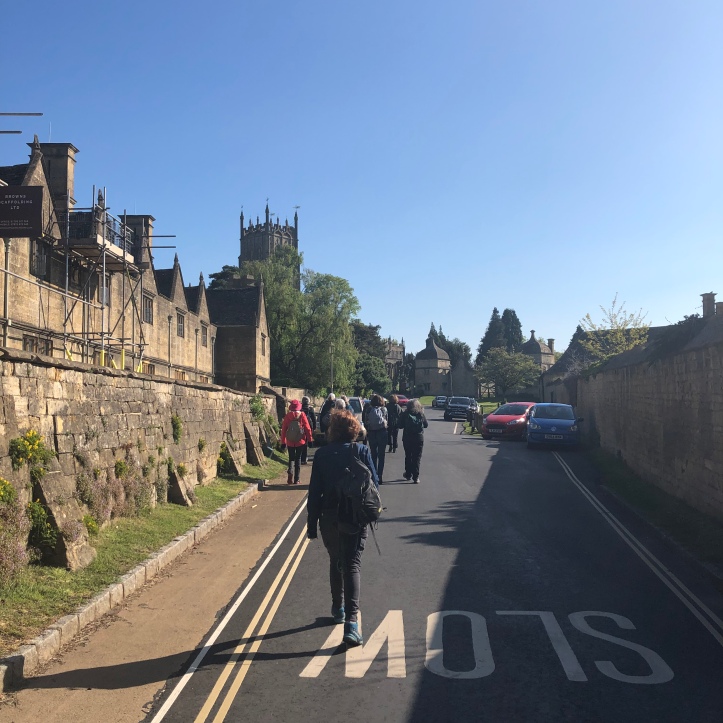 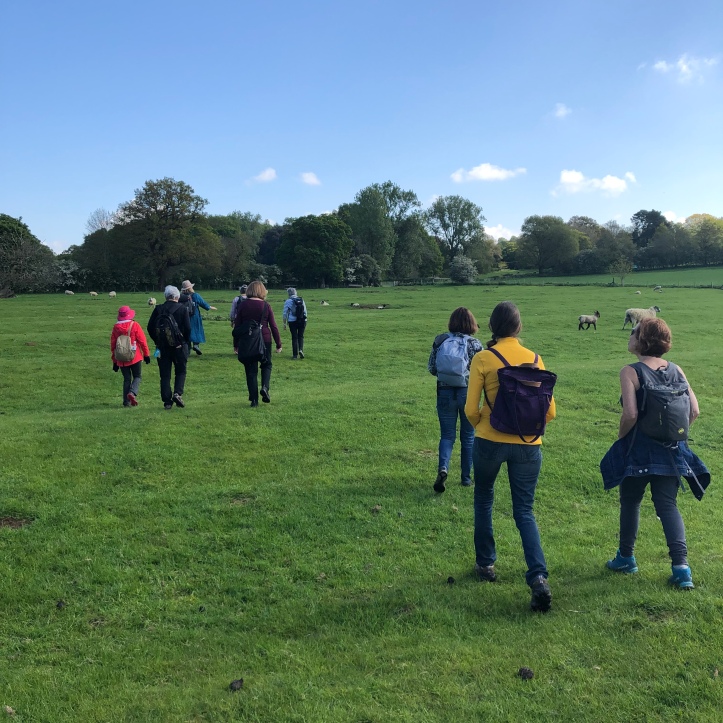 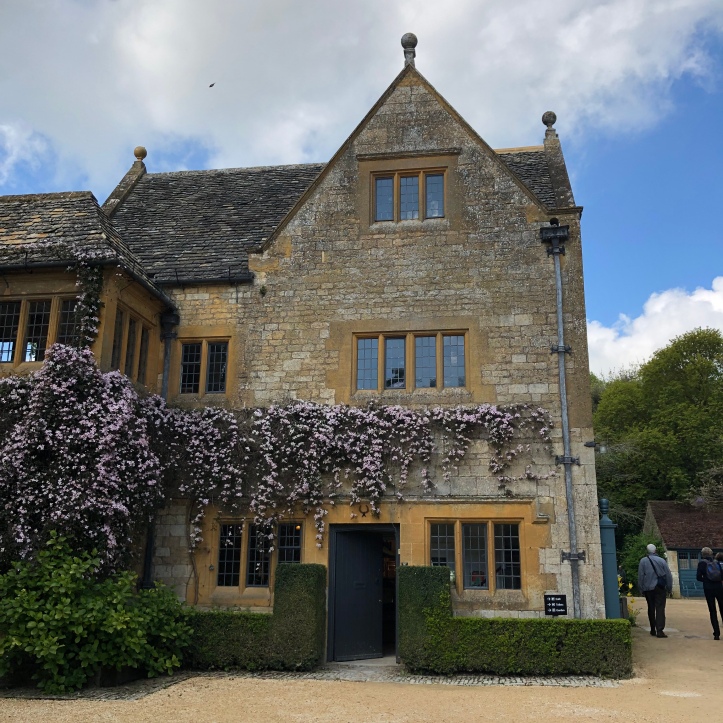 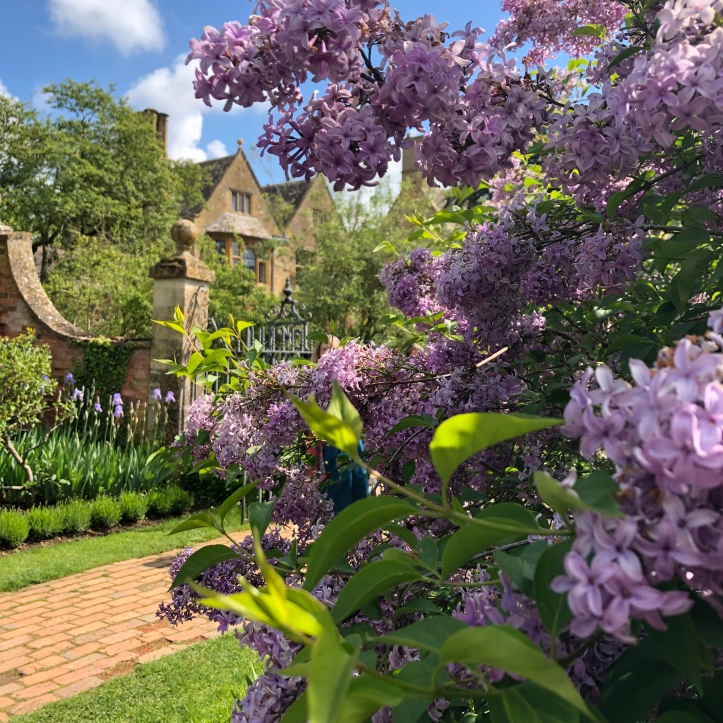 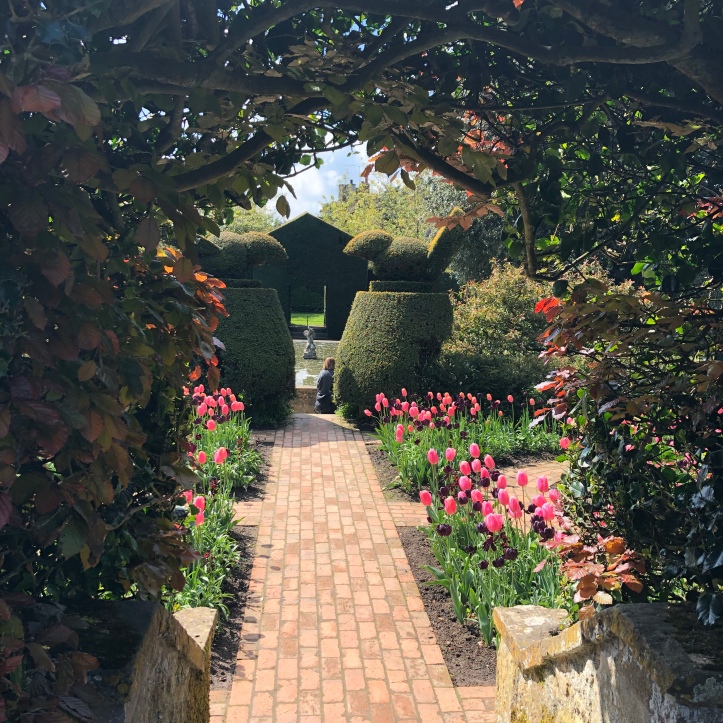 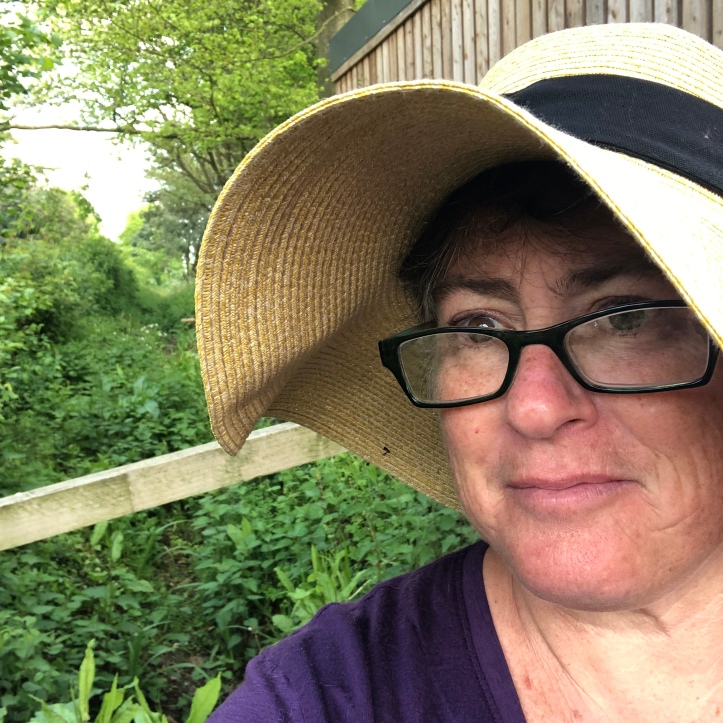 Amazingly, we’ve had nothing but sunny skies and moderate temperatures. Twice I’ve brought my hiking hat with me to the UK and didn’t use it at all. So of course, I didn’t bother this time. With predictable results. At Hidcote, I managed to find the biggest, floppiest hat in all of England. Shade for the delicate!!!

We walked back to Chipping Campden the way we’d come. Altogether, with strolling through the gardens, probably about 7 a 8 miles for the day. A respectable hike. (Usually I avoid that word, h-i-k-e, and consider it of the four letter, must-avoid variety. But sometimes it is the one that seems to fit.) On the way back, Heather and I stopped in at the Court Barn Arts and Crafts Museum. This small and lovely (there’s that word – you know how to say it…) museum gives an overview of the Arts and Crafts movement, some of its most well-known artisans, and how they fled the industrial cities with their skills, workmen, and commissions to the Cotswolds. The examples of metalsmithing, bookbinding, etching, architecture, furniture and glasswork were beautiful. The movement here is much earlier than what we think of as “Arts and Crafts” or “Craftsman Style” in the US. Though I’ve since learned that figures like John Singer Sargent and Frank Lloyd Wright spent time here during the flourishing A & C movement in the area. We think of Arts and Crafts as a post WWI, 30s to 50s phenomenon. Here, the earliest artists, artisans and critics like John Ruskin and William Morris were already making noises about the de-humanizing industrialism in the late 1800s. Many of the works at the museum are from the turn of the century. Fantastic stuff.

We finished our day with a sumptuous meal at a nearby Mediterranean restaurant. Again, as in most of our trips to the UK, the food has been outrageously excellent. Fresh, local ingredients paired with excellent preparation. Sometimes I think the excellent food in England and Scotland is kept a secret on purpose. Shhhhh! Don’t tell. Do you want everyone coming here?!?!!

Our next morning started with breakfast and gathering our luggage into the lobby for pickup. Oh, it’s wonderful to have a service move your luggage FOR YOU as you wander through the countryside. Instead of lugging it all in a backpack, we just arrive in a new location, drop our boots and sweaty clothes, hop in the shower and chuck on our city clothes. Voila! Civilization and fine food, at your service. And you’re clean and well dressed enough to participate. I’m sold.

Our first official day on The Cotswold Way. Since I’ve done this trek, and written about it, I won’t repeat myself too much. I’ll just say that this area, The Cotswolds, is designated an Area of Outstanding Natural Beauty. There are a series of walking trails criss-crossing it’s hills and valleys, with the main throughway a 100 mile continuous walk along the highest ridges. You traverse the area on the highest path, coming down from the heights to access the area’s picturesque villages for food and lodging. Most folks hike its length over 4-6 days. Our group walks some sections, then diverts to do some sightseeing or (gasp, cheating!) ride a steam train or two. The paths are sometimes through forests, sometimes along agricultural fields, but most often through a series of grassy knolls. Sheep are everywhere – at this time of year lots of ewes with month-old lambs. I’ll spare you the 37 pictures of cute sheep. And of course, with the sheep comes sheep poop. It’s so prevalent that one quickly abandons the effort of trying to step around it. Hotels and inns in the area have signs posted as you come in: Please remove muddy shoes and boots before entering your rooms. What they mean are muddy, poop-encrusted shoes and boots. But being British, are too polite to say so.

Our group is walking the Cotswold Way from north to south. And here we are, on our first day going from Chipping Campden to Broadway. 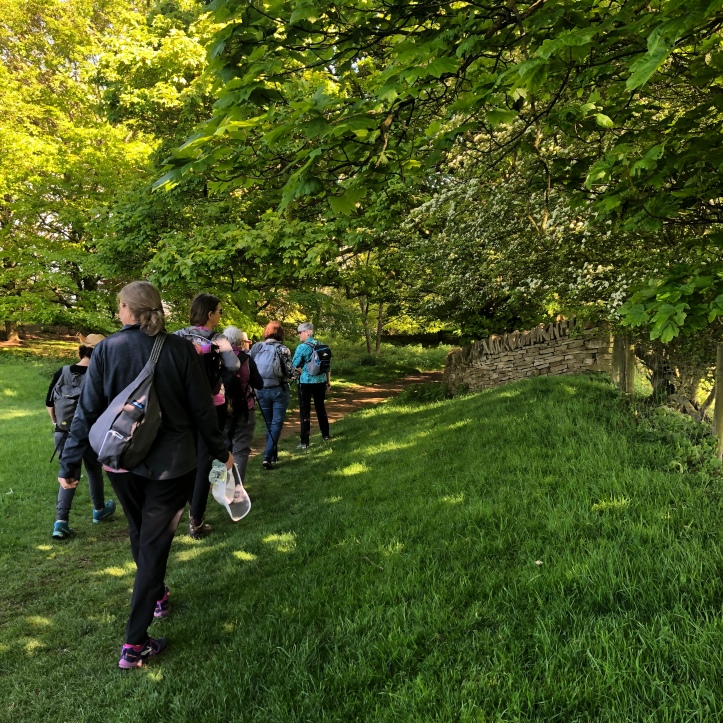 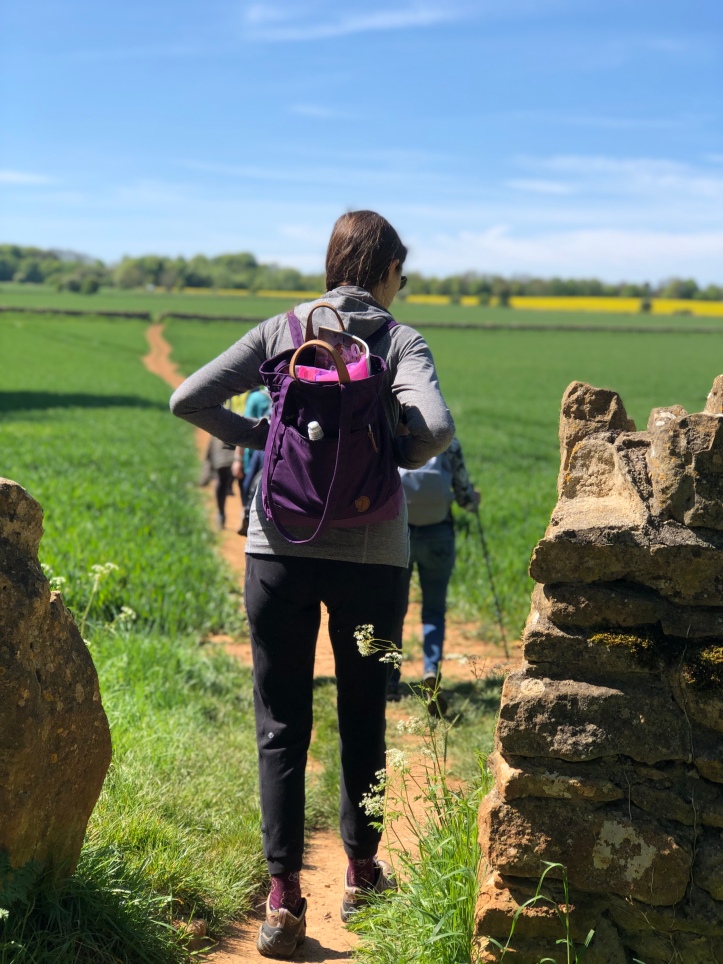 My favorite part of this walk is after leaving Chipping Campden. It’s a steep climb out of the town. But you arrive on top of nearby Dover Hill and get your first glimpse of the beautiful villages and fields stretching out all around. An aside: each year at about this time, the locals take up the Cotswold Olympick. It offers events like competitive leapfrog and shinkicking.

I asked everyone to help me adorn the floppy hat as we walked. With outstanding results! Unfortunately, we have to start over with the decorating each morning.

We came down into the Village of Broadway in the mid afternoon. A fantastic outdoor patio allowed us to gather for a drink before dinner. I’ve been reacquainting myself with the Gin & Tonic. As whisky is to Scotland, so gin is to England. Small, artisan distilleries abound. We’re trying the local version everywhere we go.

I must, must, must get dressed and going. Aurgh! So much more to tell you… like the fact that multiple times every morning we hear a great braying cacophony arise. The local hunting club’s fox hounds live just a couple blocks from our hotel. It’s hilarious. (Well, to me. Heather, who doesn’t sleep through their outbursts, isn’t so easily humored.) And that we continue to have outrageously fine meals. And that all our rooms at the Broadway Hotel are named for racehorses. Ours is L’escargot. And more G &Ts.

I leave you with my morning view out the window. And a promise to post again soon. Sorry – no time to edit for misspellings. I rely upon your forgiving nature. 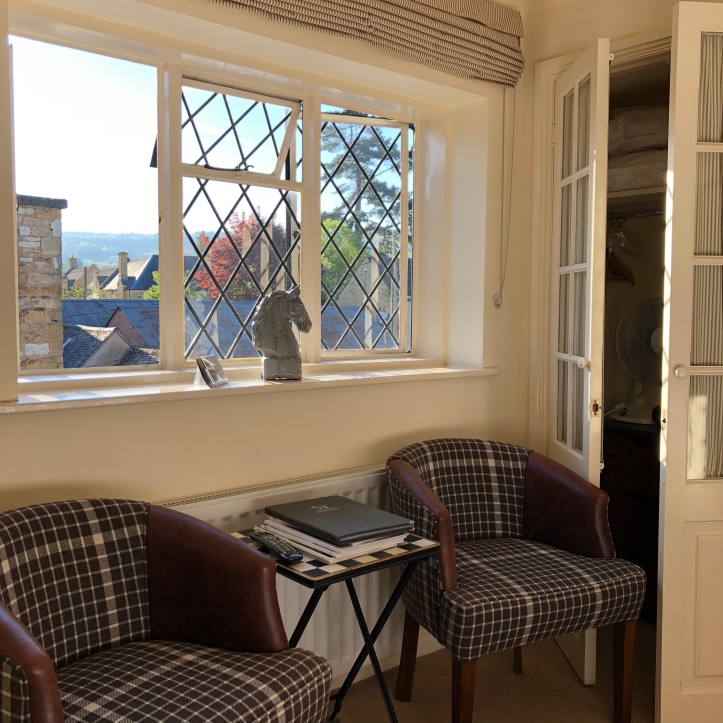