On to My First Tango in Halifax (Part 2) 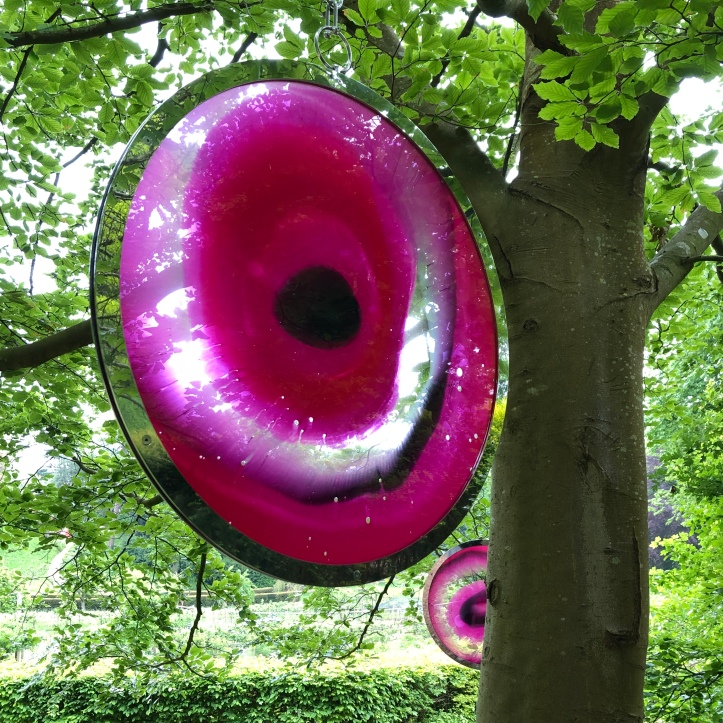 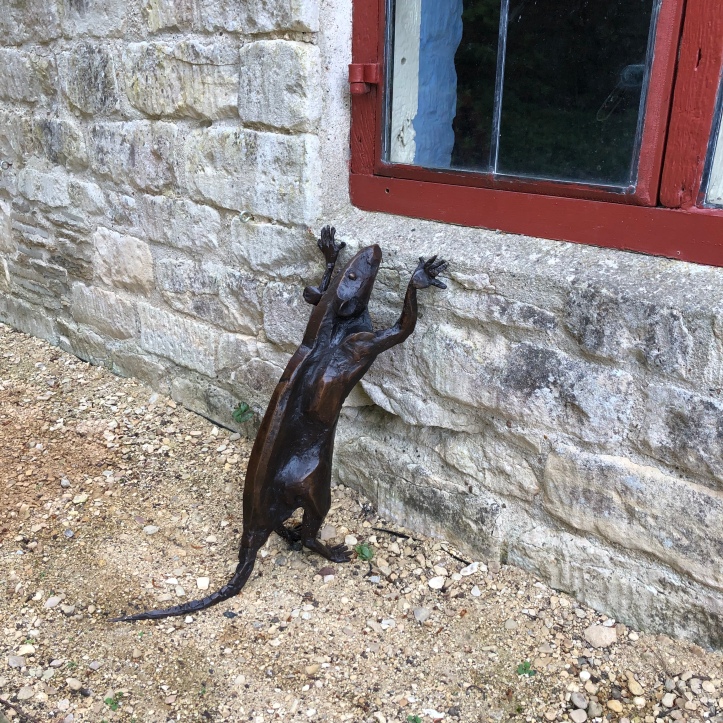 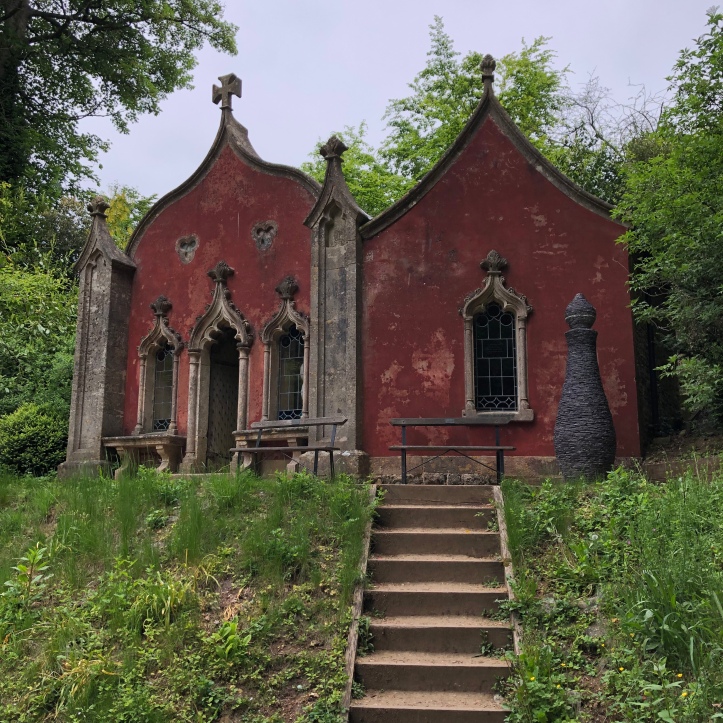 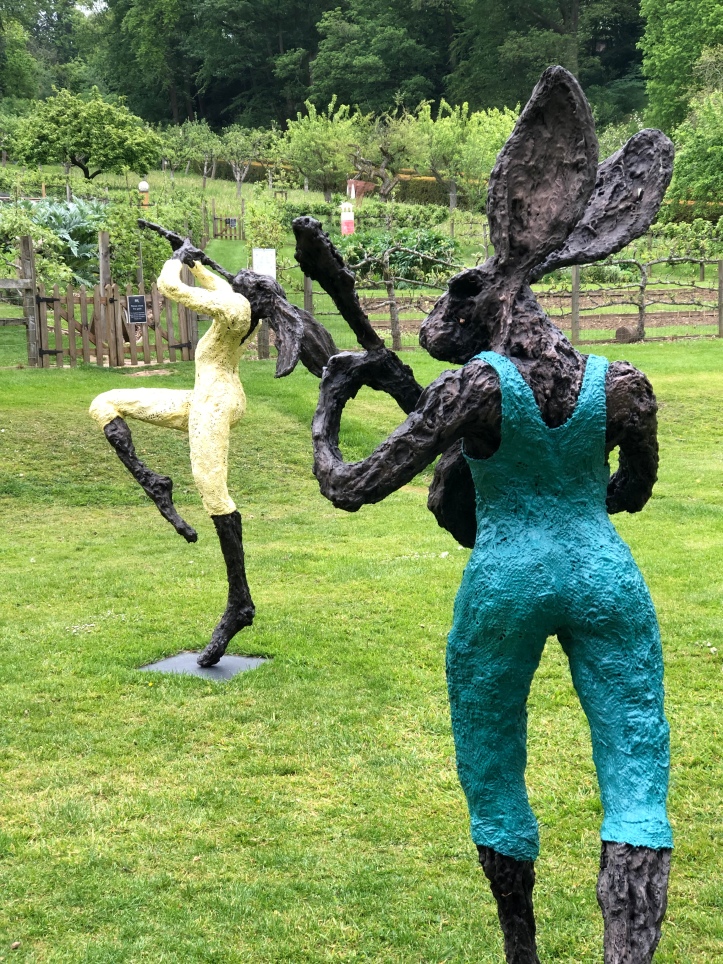 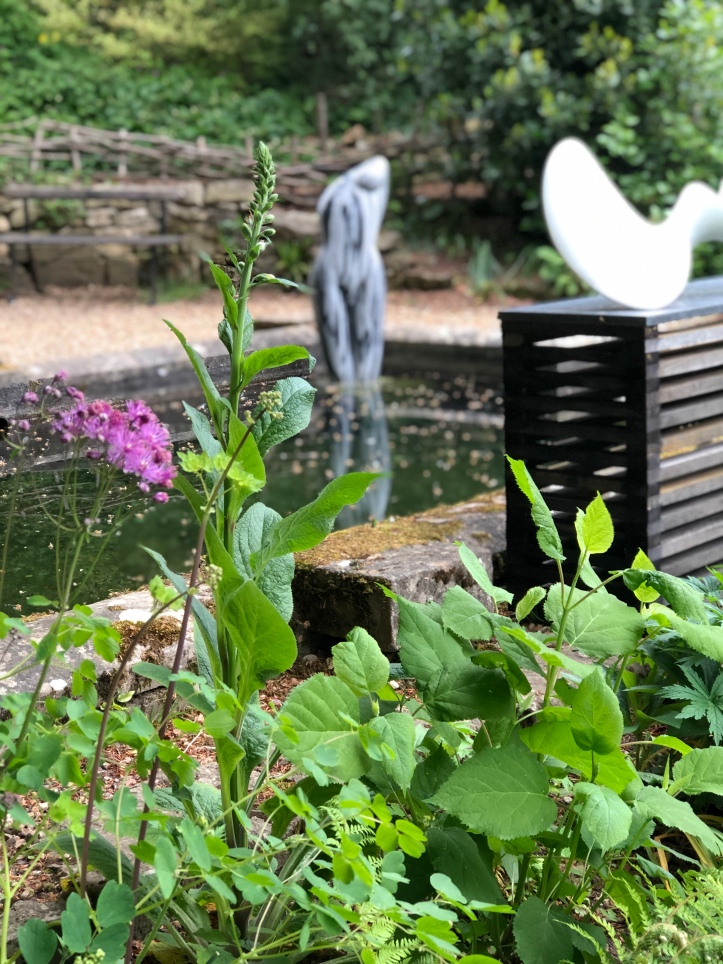 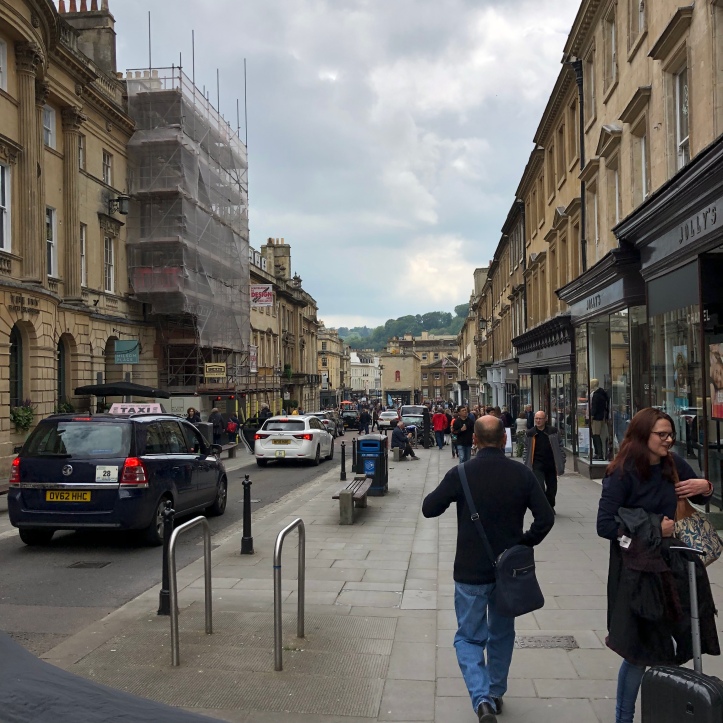 Our next morning found us off at an early hour (7:30 am ouch!) in order to get to Heathrow airport (ick!) for everyones’ flights home (aw, darn it!). But Heather and I picked up a rental car and were soon on an epic drive north.

At home, a three and a half hour drive is no big deal. But here? Massive! Why would you EVER? Cheers – better to stay home and walk to the pub, eh? However… we did it! And landed in Halifax. We found our way to the stately Holdsworth House. 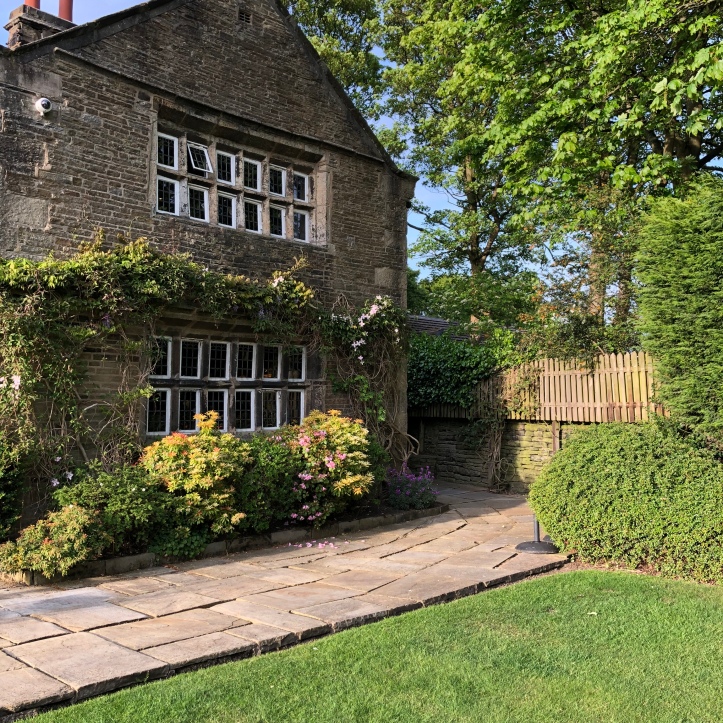 … where, as you heard yesterday, we enjoyed a peaceful evening of gin & tonic and knitting.

Has anyone got HBO? If so, you’ll recognize our next location visit from the currently running series Gentleman Jack.

Wait, before visiting Shibden Hall, we made the very important LAUNDRY STOP. Yes, Super Suds Laundrette, we are ever grateful. However do-able handwashing is, it’s completely outshone by the fantastic services of a washing machine and dryer. People, kiss your domestic machines today. They are wonderful. And much missed while traveling. And although we paid an ungodly sum to have two loads washed, dried and folded for us, it was worth every penny!

On to Shibden Hall – a most amazing building dating back to the early 1400s. It has been the home of prominent Halifax citizens since that time, with many additions and elaborate gardens added. However, it remains one of the most beautifully intact examples of Tudor era half-timber construction, both inside and out. The story of one of its residents, Anne Lister, is currently being filmed here. 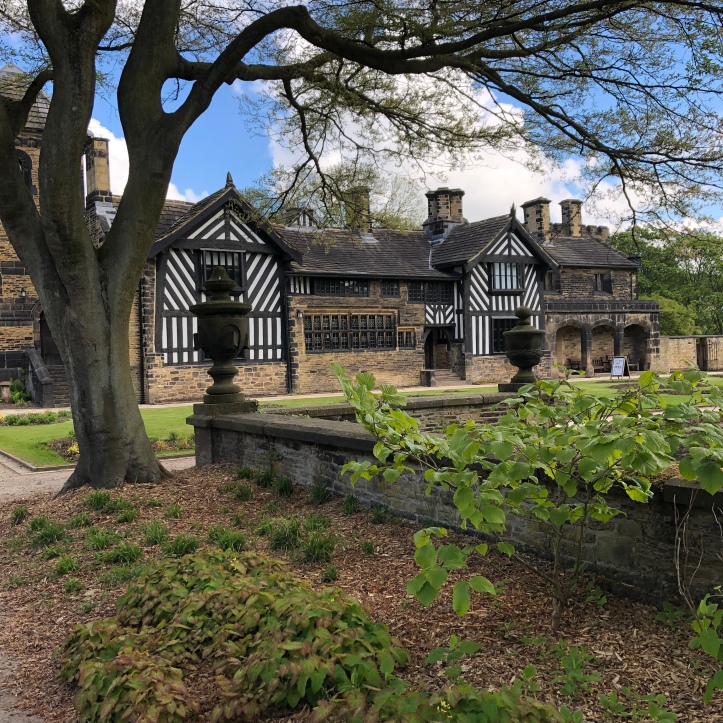 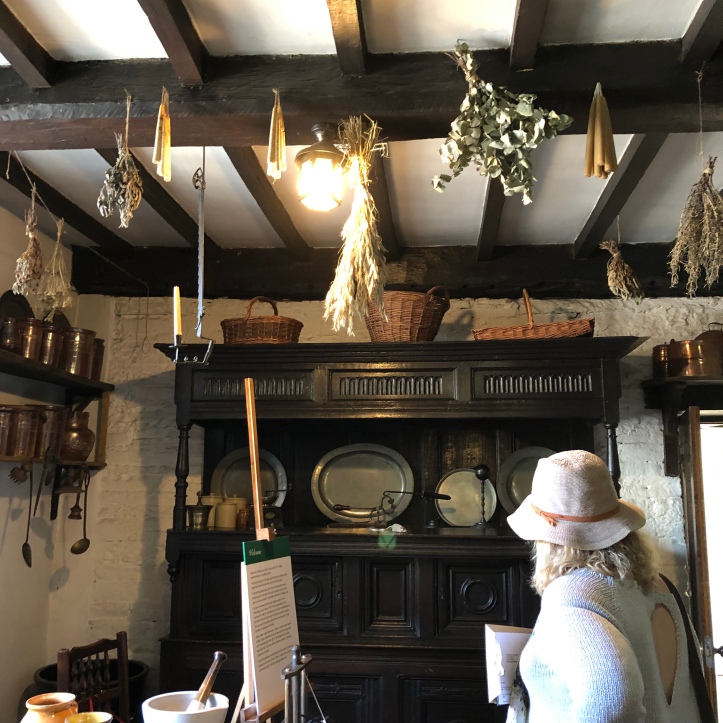 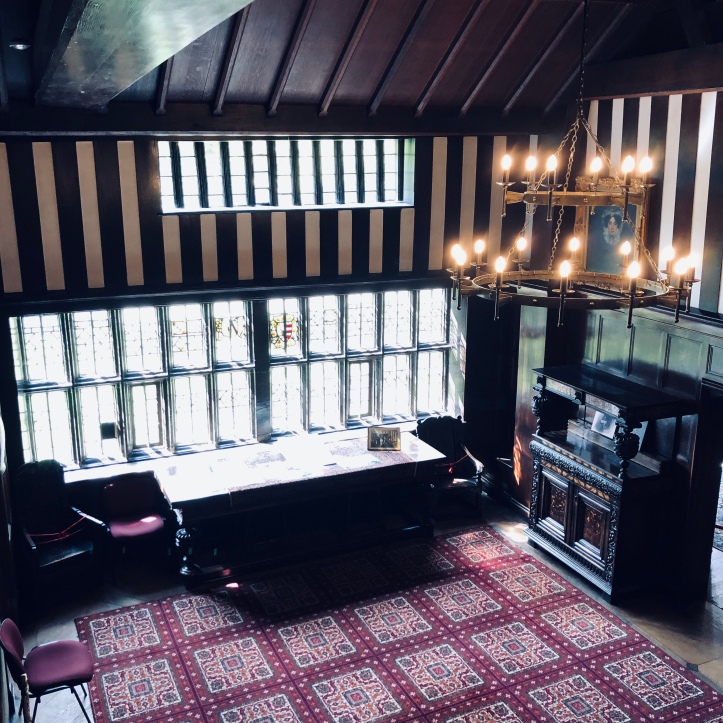 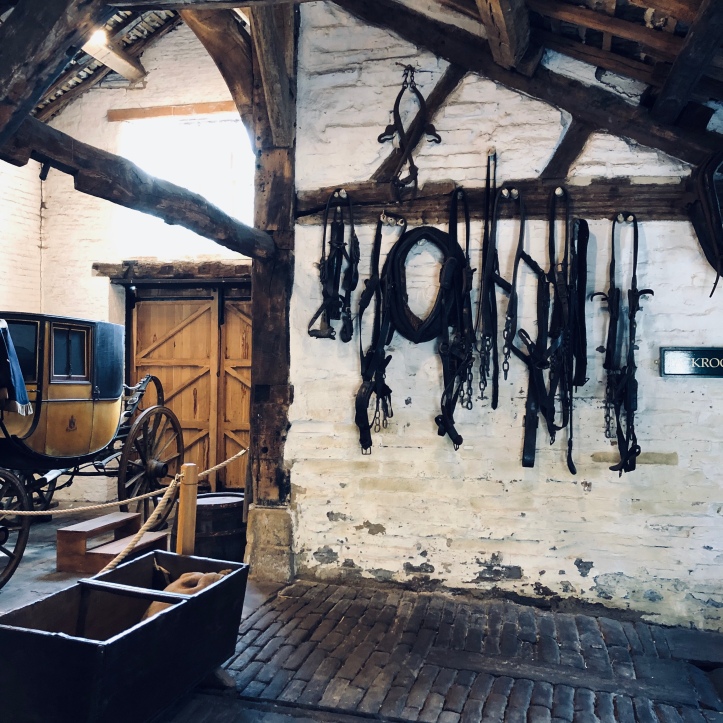 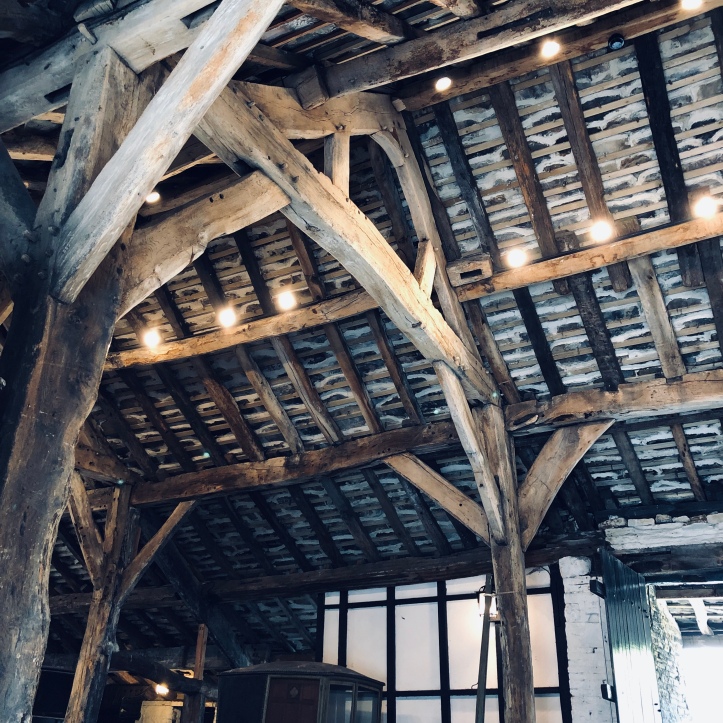 I found Halifax itself to be a most interesting town. I’m inspired to do more reading re: its history and development. The buildings, primarily constructed of area stone, are not warm and golden like those in the Cotsolds. Instead they are grey, brown, black and tan. Everything feels a bit gritty and working class. I absolutely love it. Also, the entire town is strung along a deep (what we would call) canyon, with city streets climbing sharply up both sides from the river. It was a pre-industrial powerhouse of woolen cloth – sheep farms, carding, spinning, weaving and trade in cloth. We visited the Piece Hall, a Georgian era built marketplace for all things related to the cloth trade. More on that later, as we’ll return on the 29th with a group and have a proper, guided tour. 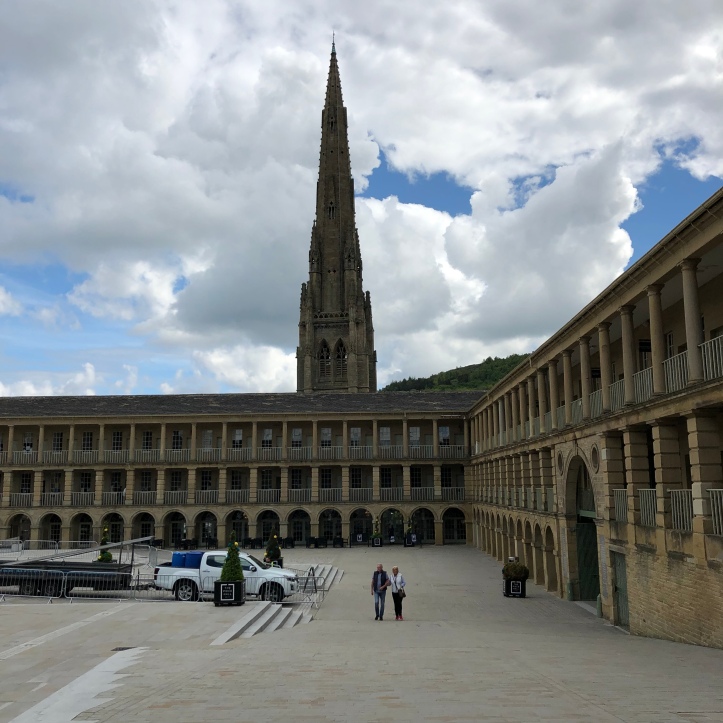 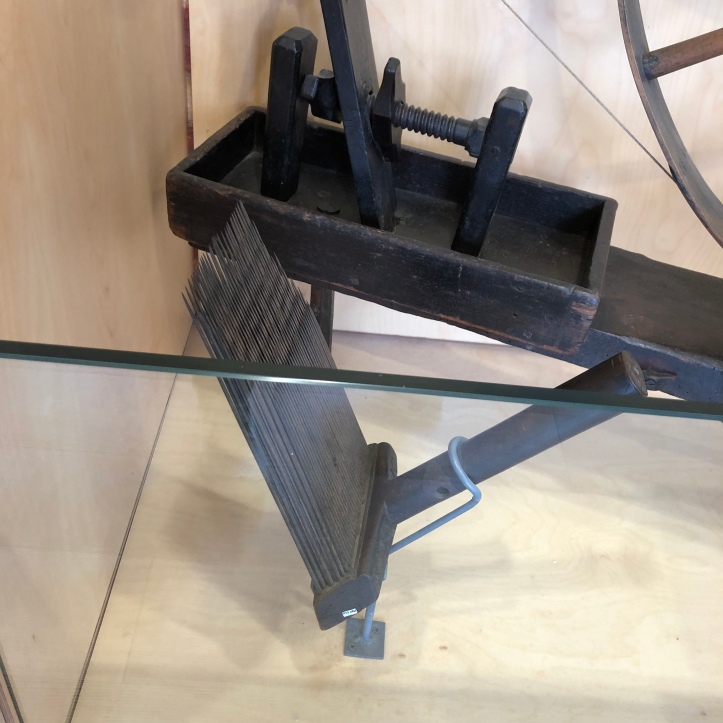 And then, it was hopping back in our tiny Fiat named Trixie and a drive over to the Lake District. I was in heaven. Two solid hours of blue skies, rolling green hills, sheep farms, stone cottages and hill farms, more sheep, traffic roundabouts (because the Brits prefer a traffic circle to a traffic light whenever possible), and chocolate cookies. 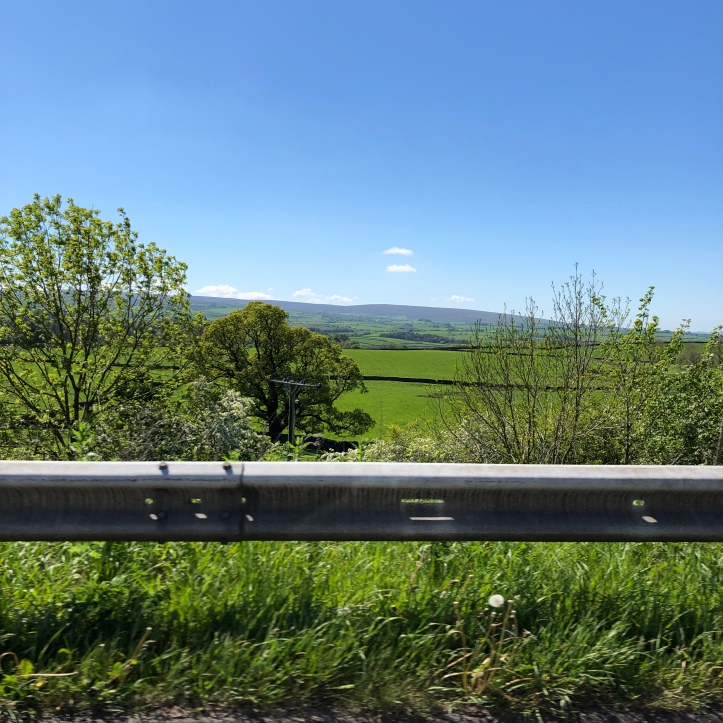 And then finally, a turn into the Lake District, ten miles of tiny, stone-wall and hedge-lined roads (and I do mean tiny – maybe 8-9 feet wide) during which Heather’s jaw was clenched in a grimace of terror. Mine too, but I wasn’t driving. But all worth it, for in the end we arrived here: Common Bank Farm along Coniston Water (aka lake). 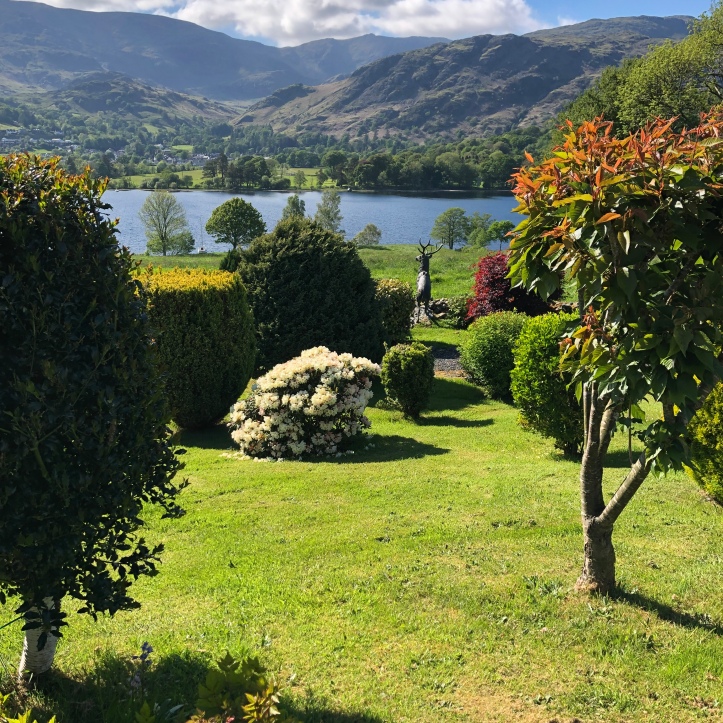 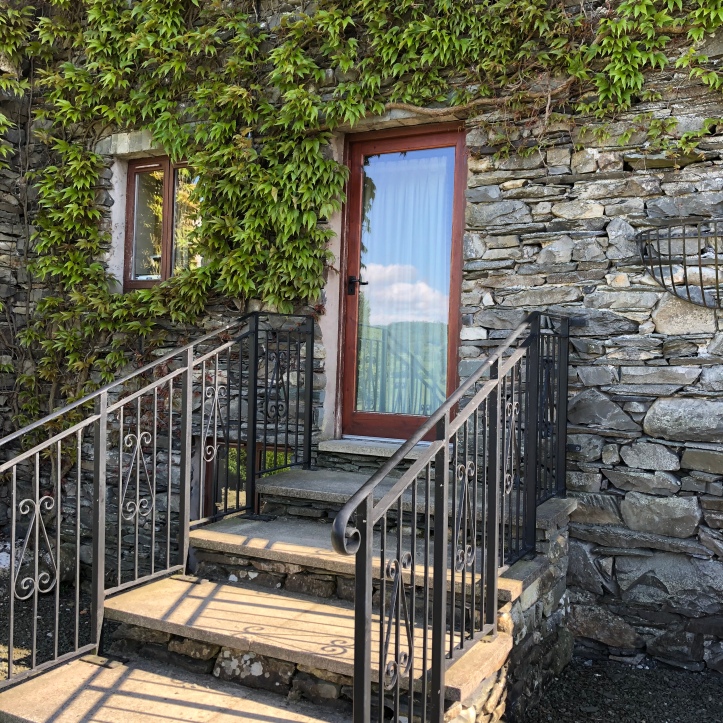 We did, however, arrive with a flat tire. Poor Trixie. The stress of driving in the Lake District was too much for her. 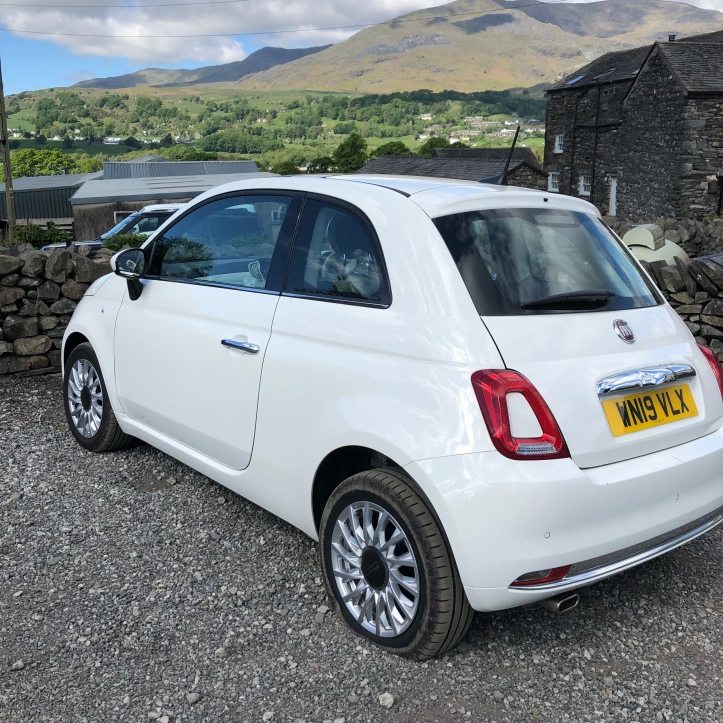 So while Heather wrangled with Avis, AA (similar to AAA but one less a and overseas) and tried to find a garage and a matching tire, I got out of the way. I wandered down to Coniston Water. 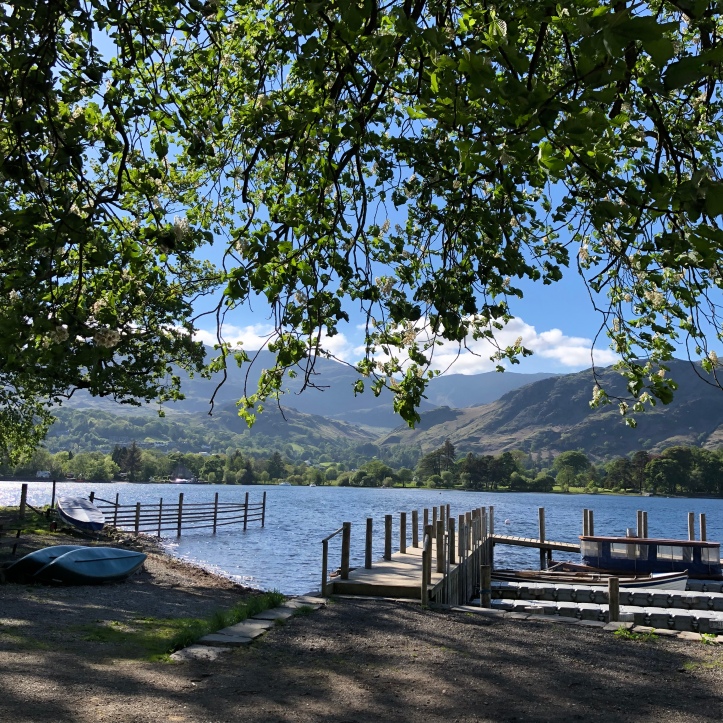 Eventually we were reassured of a tow in the morning. Oh, we would have just changed the tire but SURPRISE!, no spare in the car. It’s a common theme in the UK, I’m finding. We wandered into the nearby town of Coniston, where we found a pub and dinner and some sticky toffee pudding. All was then right with the world. Especially because we called a taxi to take us the two miles back to our lodgings. 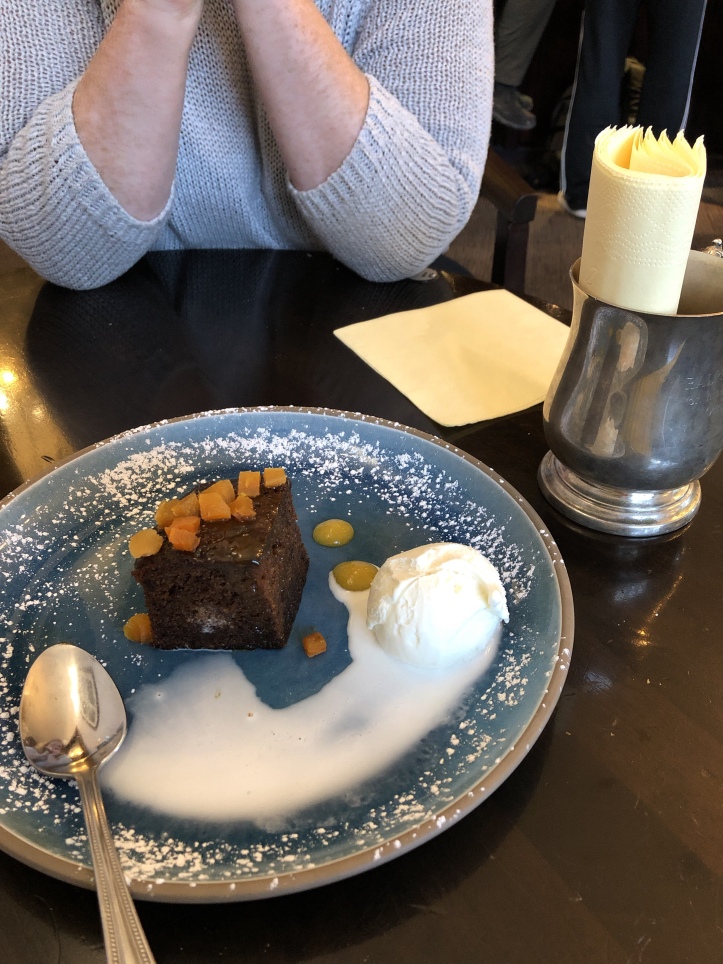 And now, we’re sitting… waiting… for the tow truck. Cross your fingers for us. We’re supposed to drive to Edinburgh.

Oh, the tennis ball! Almost forgot! My previous backpack had lovely, deep pockets along the aide in which I could put my folded walking stick. It stayed (basically) close to my body and was never a threat to anyone else. The pointy end stuck straight up. However, I forgot to think about carrying a walking stick with my new backpack. Hanging down from the top, the pointy end kind of stuck out. It could have benefitted from a cautionary flag, like too long lumber hanging off a truck. In the side pockets, it stick up but leaned away from my body, also posing a threat to life and limb. So in Broadway, I found a pet store, procured a tennis ball and promptly poked a hole in it. The shop owner looked at me like I was crazy. But when I popped it onto the pointy end of my walking stick, she broke into a big grin and then laughed. “Well, that’s sorted then!” Translation: Oh, I see what you are doing now and what a good idea!

Still waiting for the tow truck… 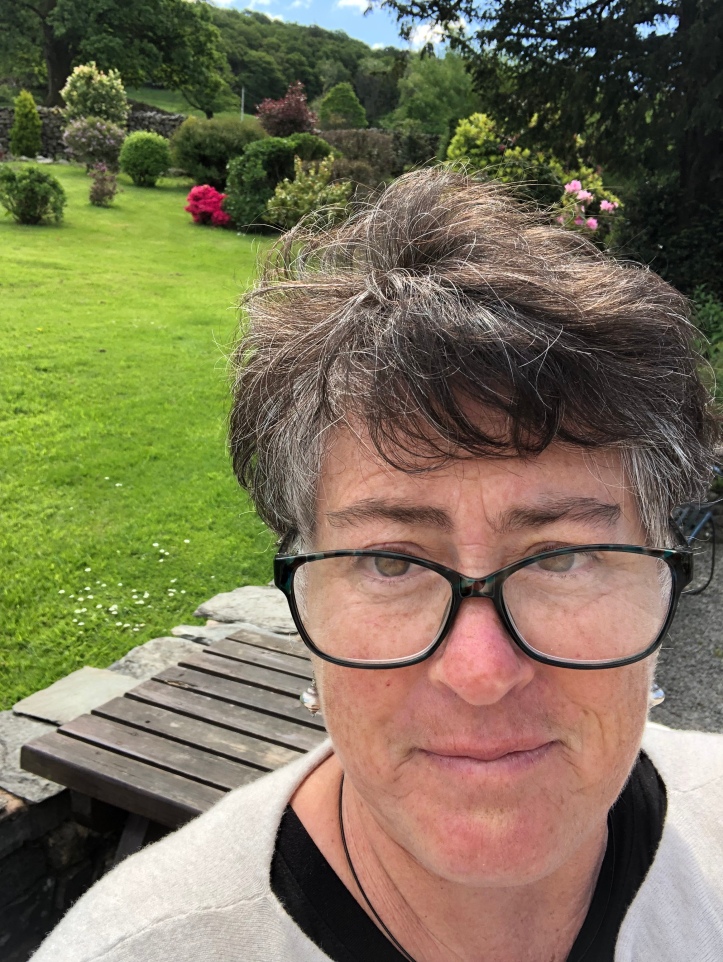 But hey, if ya gotta wait somewhere…