After reviewing my planner, I discovered it was our Saturday adventures I skipped. For shame!!! Two important visits that day: Cragside and Fine Fettle Fibres.

Cragside is the former home of the inventor and industrialist William Armstrong. As Americans, it’s likely we’ve never heard his name. However, we use descendants of his inventions every day. Armstrong was one among several Victorian era engineers and industrialists who put Newcastle on the map. His home in Northumberland – originally just a small “shooting lodge”- was so full of ahead-of-its-time wonders that when Queen Victoria and Prince Albert visited the area, they chose to lodge at Cragside rather than at nearby (and appropriately aristocratic) Alnwick Castle. One cannot blame them. Cragside had central heating. It was the first fully electrified residence in the area, thanks to Armstrong’s hydroelectric doodads installed onsite. It had the precursor of the elevator — developed to help lighten the load of its domestic staff. Goodness, there was even a Turkish bath. And flush toilets. And an elaborate garden.

Heather says this is her favorite house in all of the United Kingdom.

That’s saying something, because we’ve been in some spectacular ones.

(Mine so far is the MacKintosh residence in Glasgow. I’m not sure it counts, though. It’s only the interiors of the house, saved and reconstructed for the Hunterian Art Gallery when the University of Glasgow expanded into the house’s neighborhood.)

I should have taken more and better pictures. But once I saw the William Morris textile covered furnishings (originals! gah…) I was in a daze. Actual Morris textiles. You’ll see pinecones carefully placed on the furniture with original textiles — to keep people’s bums OFF! 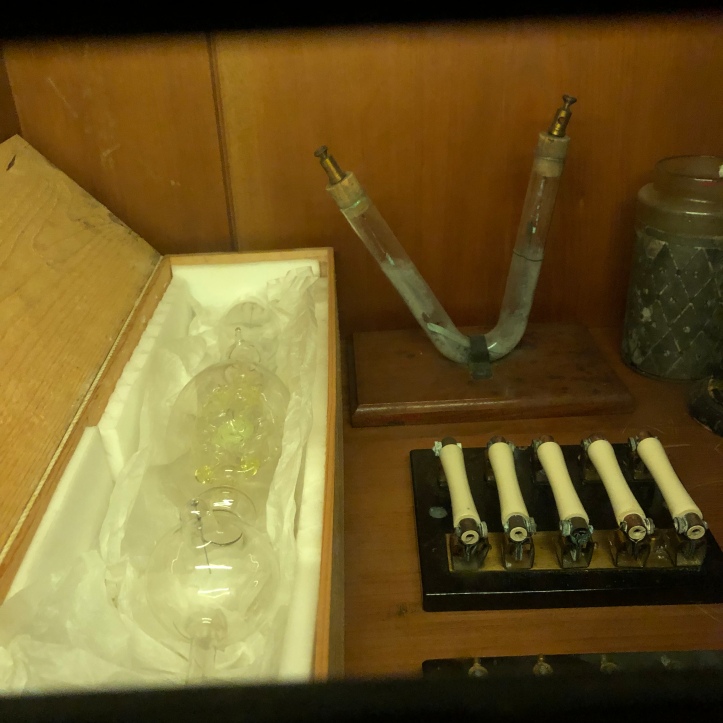 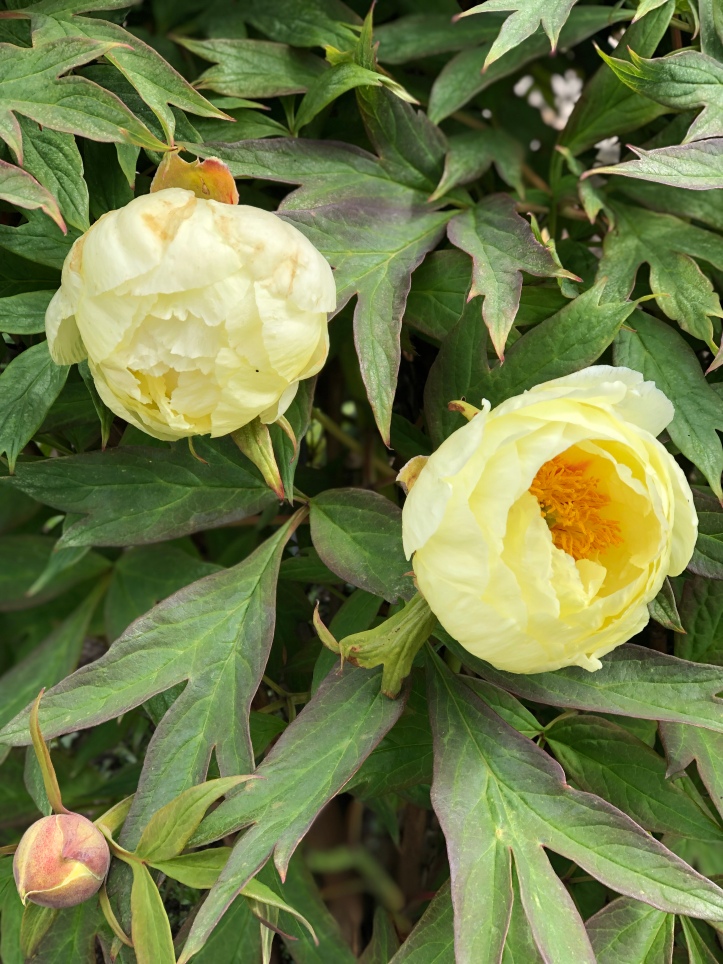 I really did not do this place justice in the pics I took. Sorry about that. Sometimes I forget to be an archivist and just become a person immersed in the experience of a place. It was really fantastic.

Next we ventured along to an iconic yarn store in the UK: Fine Fettle Fibres. As Heather describes, it’s a beautifully curated collection of the finest UK wools, yarns and independent dyers. I’d reel off the names here, but most of my family and friends wouldn’t be familiar with them or with the significance of the collection.

I can try to give you a bit of context. It might explain something about why we visit this place. As you travel around this country, you see sheep everywhere. I mean everywhere. From the first moments beyond the urban centers, there are white dots roaming the hillsides. So why should I be so excited about a yarn shop featuring British wool and yarn? It would seem like that’s a big, important thing here. Right? Well, not really. There might be a great tradition around knitting and the use of wool in Britain, but the wool industry and its related sources, processes and products have been in decline for a long, long time. In fact, for much of the twentieth century, as synthetics and cheap imports made their way into the position of “preferred” materials. To combat the trend, a national Wool Board was created to centralize wool production. It was supposed to increase the efficiency and negotiating power of wool producers. For years, the country’s sheep farmers have been selling (by mandate) their yearly yield to the centralized Wool Board. There, the wool is graded and farmers are given a price for their wool based on that grade in combination with the current market. However, the price of wool has been dropping for years. (Basically since the Wool Board was created.). Little wonder that farmers became more interested in keeping sheep for meat rather than wool – or left sheepkeeping altogether. And frankly, there was very little incentive to improve the quality of wool produced by a given flock.

However, in the last few years, there’s been a big effort to reinstate the quality and prestige of British wool. HRH Prince Charles started his initiative, The Campaign for Wool, in 2010. Its purpose was to support those involved in the industry (farmers, mills, fashion, furniture, retailers, artisans) and to assist them in helping the country move away from petrochemical based fabrics and back to greater use of this traditional, sustainable, natural product. Somewhere along the way, individual sheep farms also began to realize they could get much better returns on their wool if they improved its quality, processed it themselves, and offered it directly to the consumer (in the form of fleeces, yarn, finished garments and bespoke textiles… a la A. Elliot Weavers, Whistlebare, and other small manufacturers we’ve been visiting.) In the US, this process of farm-to-crafter has been going on for a long time. For instance, the Taos Wool Festival is in its thirty-somethingeth year. But in the UK, the system was strongly centralized for a long time. Only recently have farms had the option NOT to sell to the Wool Board. It’s still seen as a novel undertaking. But the mavericks doing it are showing ’em how it’s done. Fine wool, carefully raised and milled, turns literally into spun gold. Artisans, crafters and plain old regular folks are all willing to pay for quality.

And this shop, Fine Fettle Fibres, is a gathering point for the very best of this new movement in the UK. West Yorkshire Spinners, Blacker Yarns, Baa Ram Ewe, Garthenor, Dovestone, Triskelion… the list goes on and on. If you could choose one yarn store to visit in all the United Kingdom, you’d do well to visit this one, tiny gem in the far north county of Northumberland.

Even I gave in at this mecca and purchased several skeins of something I’d never seen (or felt) before: a wool/linen blend from Blacker Yarns. Yes, I’m supposed to be knitting down my existing yarn stash. But as Arlo Guthrie once said, “Ya can’t always do… what yer supposed to do.”

And did I show you this earlier? It’s a kit made up by the owner of Fine Fettle Fibre — just for us! Each kit comes with mini-skeins of individual breed yarn, an information on each of those sheep breeds, pattern, and special bag. Every participant in the tour got one. And now it’s available as a kit to purchase any time from FFF. We were so excited to be a part of this project!

I’ll tell you what… after a quick stop at the shore to put our feet in the North Sea, we were all knitting up a storm back at our hotel that night!

Yes. We’re knitting geeks. And proud to be so!

So now I’ve caught you up. And next up will be our time in the Lake District. Until then, my friends, keep knitting! And if you don’t knit, be a knitting appreciator.

There is such a thing.